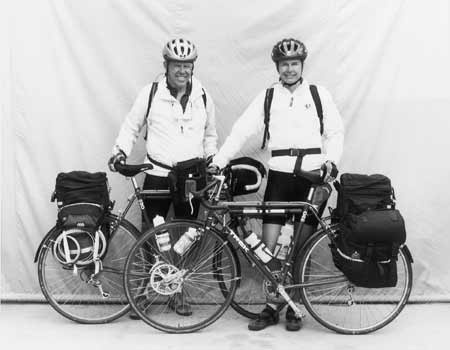 A "surplus of tailwinds." Only "four days of rain in 69 days of cycling." Sounds like retired banker/Adventure Cycling member Charles Hazelrigg's luck held up pretty well during his east-to-west TransAmerica ride last summer with his daughter, Nancy Hazelrigg. The Hazelriggs decided on an early spring departure for their adventure, leaving Yorktown, Virginia, on March 28 in order to take advantage of cooler weather, and to complete the Trail by their self-imposed deadline of July 1. They arrived in Florence, Oregon, on June 20.

"Our plan worked well," wrote Hazelrigg on his Open Road Gallery feedback form. "The emerging spring was a joy through the entire journey. There were a few snow flurries in the high country, but no icy surfaces. The temperatures were quite agreeable for cycling. We believe that we were remarkably lucky to have such great conditions."

Nancy Hazelrigg, 39, stepped up to join her 65-year-old father on the journey after his attempts to find a contemporary to ride with him were unsuccessful. The younger Hazelrigg realized she was ready for a career change, and that a TransAmerica tour would be the perfect break for reflection, and possibly for making decisions about her future.

As it turned out, the father-daughter team benefited in all sorts of ways. In an interview with a newspaper in Colorado, where the pair stopped at the family home in Evergreen to rest for a week, Nancy said she had already been able to clear her mind. She felt the ride had given her confidence in herself that would carry over to her professional life.

Dad Hazelrigg, who retired from a job as president of United Banks of Colorado, had come to realize that when his three daughters were growing up, he had been a very busy man.

"I missed a lot of special times with them," he told the Canyon Courier. "This (trip) really gives us an opportunity to know each other in a whole different way."

And like most TransAm'ers, to know the nation in a whole different way as well.