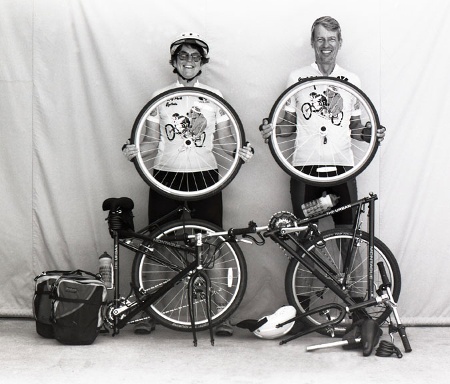 San Francisco physician Tom Hall and his companion, public health practitioner Liz Mcloughlin, turned up in Missoula in July of 1997. They flew into town in a Cessna 172 XP (N736TB) with their Montague folding bikes and camping gear tucked into the fuselage behind their seats. They were on a three-week flying/cycling tour roughly following the route of Lewis & Clark along the Columbia, Missouri and Yellowstone rivers. They flew into various points along the route and then broke out the bikes to explore the area.

“If only Lewis and Clark could have joined us for the ride! The stories they could have told! Since Lewis was such an astute observer and chronicler of all that he saw, what would he have written in his Journal about what he could see out the plane window? What would he have written about dams obliterating the great falls and rapids on the Missouri and the Columbia rivers? What would be his thoughts, watching long freight trains snake through the gorges, and six-lane highways with vehicles speeding over the mountain passes, the same ones which posed such a challenge to his “Corps of Discovery”. What new species would he sketch in his journal – ski-doos or windsurfers or pick-up trucks or ultra-lights? Would he remember their indecision about which fork of the river to follow when at 9,000’, he could see at a glance what it took him a week to discover by foot? Would he yearn for his daily diet of 6 to 8 pounds of elk, deer or buffalo meat, as we offered him freeze-dried turkey supreme over instant rice? What curious comfort he might take in finding mosquitoes can be just as annoying now as they were then – some things never change!”