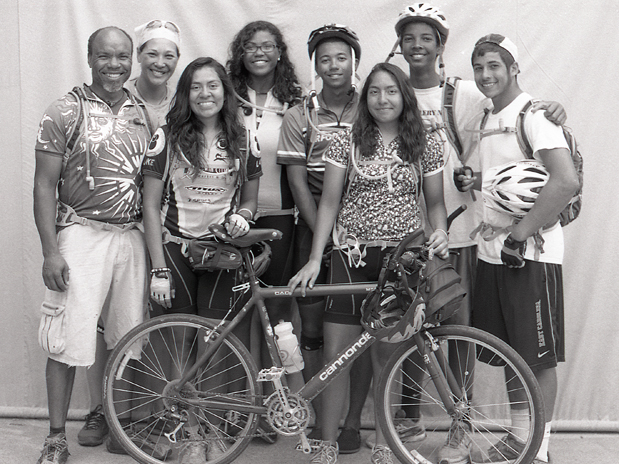 In 2011, Suepinda Keith and her husband, Kevin Hicks, brought together a group of high-potential, lower-resourced teens and struck off along Adventure Cycling’s Underground Railroad Bicycle Route from Mobile, Alabama, to Niagara Falls, New York. Kevin remembers, “We only camped out about three days in total. We stayed with station masters, people who put us up for the night.”

“The tour was such a success we decided to try again in 2012 on a new route — Adventure Cycling’s Lewis and Clark Bicycle Trail — but this time we included more camping and became a nonprofit. Our focus was to get low-income minority youth on bikes, exploring the great outdoors and national parks,” Suepinda said. The group was challenged both mentally and physically, learning leadership skills Suepinda and Kevin believe will help the kids excel in college and throughout life, and both tours focused heavily on the history of the selected route.

“I learned that there were over 200 treaties between the Native American nations and the U.S. goverment; not one was honored,” 17-year-old Jeimy remembers. “I got the chance to experience the effects of how the Native American identity has been transformed over the years.”

“While there were a few instances of racism on both tours, they were minuscule in comparison to the overwhelming expressions of hospitality from whole towns to individuals,” Kevin said.

So what does the future hold? The group is already planning their 2013 tour which will use Adventure Cycling’s Great Rivers South maps as they ride along the Mississippi River from New Orleans to St. Louis, in conjunction with the National Network to Freedom.