Hats Off To Dick & Els 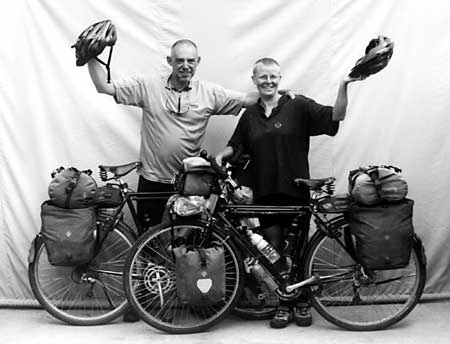 In 1996 Dick Verschuur and Els Schaap were at a crossroads in their lives and decided that a change of lifestyle was needed. After reading an article about Frank van Ryn, a Dutch cyclist, they started planning a seven-month bike trip. Once they hit the road, seven months became thirteen, and a new lifestyle was born.

Eventually they made their way back to their home in Holland to plan the next trip, a three- to five-year tour covering all of Europe and South and North America. They stopped by the Adventure Cycling office on their way to Alaska with many stories to tell.

During our travels we found out that people are basically the same," Els said. "They have the same needs, hopes, and dreams. And everywhere we found out that people are hospitable and helpful." Dick added that so far the country that is most friendly and hospitable is the United States. "People stop their cars, give you sodas, and offer you a place to stay in their homes."

Dick and Els want to take their hats, er...helmets, off to all of the people who have been so kind on their journey. They also want to return some of that kindness. After reaching Alaska, they planned on returning to Holland and traveling the country, giving presentations and hoping to raise money to build a school in Seqou, Mali.