Grand In Its Entirety 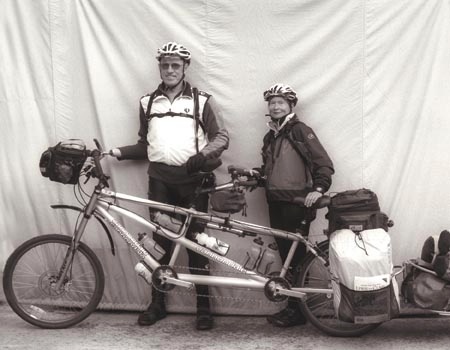 Ed and Pat Krebs are truly dedicated cyclists. These former members of the Pennsylvania state legislature decided to retire early with a bit less so that they could ride their bike more.

Upon retirement, they bought a Cannondale mountain bike tandem and started planning trips. They armed themselves with DeLorme’s Atlas & Gazetteer from numerous states, various itineraries from bike touring companies, and a plethora of cycling guide books.

Having cycled thousands of miles with various levels of sag support and indoor lodging, in 2003 Ed and Pat chose the Lewis & Clark Bicycle Trail to take the plunge into self-contained touring. When they stopped by the Adventure Cycling office last year, they were cycling their third segment, a loop route around Montana starting in Great Falls.

There are certainly challenges with self-contained touring, and, in the Krebs’ case, they are somewhat compounded by the fact that Ed only has one arm. Their tandem has been modified so that Ed can shift and brake comfortably. He also serves as the chief mechanic, though Pat adds that she provides an extra hand when needed. There are also situations that come up during trips that require coordinated teamwork. During a previous trip in Iowa, they had to negotiate through several hundred feet of mud. Within a few feet, their bike and BOB were immediately coated with the stuff and they couldn’t pedal any further. They unloaded their gear and the one-armed captain carried the tandem while the stoker lugged the gear.

The latest trip exposed other demanding aspects of self-contained travel. On the second day of their trip last year, they experienced flat tires while riding in rain and forty-degree temperatures. The next day it rained again, their BOB trailer had a flat, and then at the end of the day their chain broke. But just as they began to question their preparation and sanity, the weather improved, the tandem and BOB performed flawlessly, and they cycled amidst days of breathtaking scenery. This again reminded them that the most important thing that they’ve gained from their trips is the knowledge that even when there are moments of adversity, these times will pass and the trip will, in its entirety, be grand.