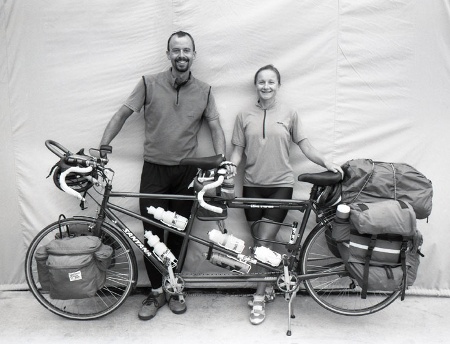 1995 was the year for Peter Underwood and Mary Jarosz’s big honeymoon ride. The two Wisconsin pharmacists began their ride in Yorktown, Virginia, the eastern trailhead of the Trans-America Trail. When they hit the west coast they rode south to Los Angeles then east to Las Vegas where the tour ended after a total of 7,116 miles.

Peter and Mary had been riding tandem for five years. They became engaged in July of 1994 while riding the Blue Ridge Parkway and married in October of 1994. “This trip has been our dream for a number of years and finally we took the plunge, resigned from our jobs, packed up our household and started biking. Our trip was everything we ever hoped it could be and more.”

The duo composed a newsletter at libraries and copy shops along the way that they mailed to 100 friends and relatives who followed their progress. The last edition included some numerical summaries of the ride:

6 – Most number of consecutive days without a flat tire

25 – Longest uphill in miles, Amboy, CA (in the Mojave Desert)