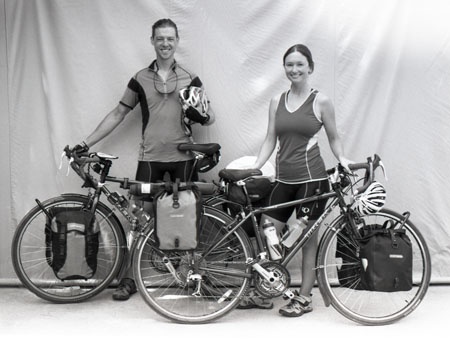 Joel and Jessica Koontz of Greenville, South Carolina hiked the Appalachian Trail in 2006. It was an adventure that got them thinking about bicycling across America. So in 2009 they set out to ride the TransAm Trail.

“In 2006, we hiked the Appalachian Trail. On our six-month journey from Maine to Georgia, our love for adventure was confirmed.  Since we’ve come home and settled into the “real” world, we’ve been hankering for that other life of sleeping in a tent, cooking our dinners on a beer can stove, reveling in the kindness of strangers, and…simplicity.  So, we bought touring bikes, padded spandex shorts, chamois butter and two one-way plane tickets to Oregon.

“We have a lot of hopes and expectations for our trip, including increased closeness to each other and opportunities to grow spiritually; we’re crossing our fingers that Joel will catch at least a few trout with his new seven-piece fly rod (he won’t fish while biking unless he can figure out a way).”

They also decided to use the trip as an opportunity to raise funds and awareness for a non-profit close to their hearts, the National Kidney Foundation. Jessica’s sister Jennie, has chronic kidney disease and the Foundation has helped her tremendously as she undergoes dialysis and waits for a transplant.

After the trip they reflected, “We pedaled into Yorktown, VA, the terminus of the TransAmerica bike route, on August 7th.  In the weeks since we’ve been home, our tan lines have faded, our muscles have softened, and our memories of summer ‘09 have become rose-tinted. According to us right now, there were no hardships on the entire trip.  Thankfully we have our journals to keep us honest.  But seriously, our last week was blissful, a perfect blend of all our favorite things about bicycle touring.”