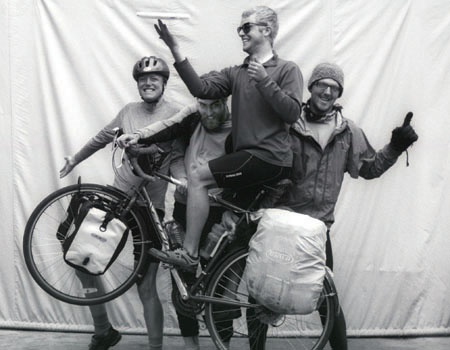 Matthew Canale (on the bicycle) wanted to bicycle across America with his buddies when he graduated from college in 2006. When he ran it by his family, though, his idea was met with resistance. They saw riding a bicycle across the country as an unnecessary activity that would put him in harms way.

His uncle in particular was against him taking the journey. Leading up to the trip, this same uncle’s son was battling cancer. Tragically, Matthew’s cousin passed away the week before he left. His uncle told Matthew that he just wouldn’t want his father to go through the pain of losing a son as he had. He even offered his truck for Matthew to drive across the country in.

Matthew, however, was determined. But that’s not to say that he didn’t have some fear. He said, “Before the trip, I was afraid. I was afraid of failing, of getting hurt, not knowing enough about cycling, lots of things! Yet there was something in me that said that it was something I needed to do.”

He felt that he had to prove to himself, and perhaps to his family, that there are good people in this country. On the trip, Matthew and his friends at times knocked on doors looking for a yard to pitch their tent in. They were continually amazed when strangers would be willing to help them out with accommodations, and on many occasions, a meal. Matthew recounted, “We got help where we needed it from churches, firehouses, and total strangers that we just met along the way. The hard and unfortunate thing for many to understand is that some people simply want to help others.”

So with the support of his riding partners (inset photo) and the people on the road, he eventually won the support of his family back home. Matthew sums it up by saying, “As a cyclist we passed going east said, ‘Cheers to the road.’”