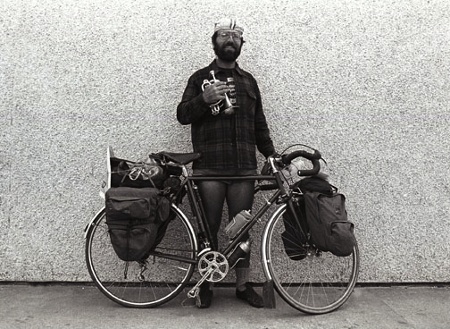 George Recker, of Arlington, Virginia, rode the TransAm Trail in 1982 in an Adventure Cycling group. The 36-year-old musician took a three-month leave of absence from his job as principal trumpet in the Opera House of the Kennedy Center in Washington, D.C. Nonetheless he brought a trumpet along to “stay in shape.”

George also had a particular talent for finding various treasures along the roadside. Here are some of his TransAm pickings: 3 neckties, a 10’ x 10’ nylon tarp, a red scarf, hats (“too numerous to keep track of”), hunting knife with sheath, many kitchen knives, nail clippers with case, many bungee cords, towels, green wool sweater, ballet slippers, sunglasses, bottle of unopened Thunderbird wine, cigarette lighter, electric mixer, bicycle mirror, Thermos cooler jug, $110 in cash and a pheasant just killed by a car (later consumed that evening in camp by the group).

Sometime after his TransAm tour, and perhaps because of it, George moved to Eugene, Oregon, and became a fishing guide.