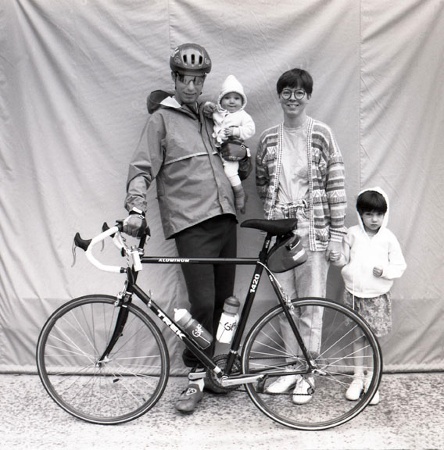 When John Goar was 16 he saw an ad for Bikecentennial ‘76. He wanted to sign up but just couldn’t get the money together to pull it off. In 1993, 17 years later, he decided it was time to tackle the TransAm Trail.

But he wanted to do more than just a ride for himself, so he decided to use his ride to raise funds for the homeless shelter in his hometown of Lynnwood, Washington. The middle school math teacher was able to make a quick ride because his wife Leatha was close at hand in a support van. His daughters were part of the support crew – 4-year-old Allison and 6-month-old Julia.

He completed the ride in 43 days, including 3 rest days, for a grand total of 4,343 miles. On thirty-four of those days, he rode one hundred miles or more. And when he completed his journey he was able to make a donation of more than $4,000 to the Everett Gospel Mission for their homeless shelter and food bank.