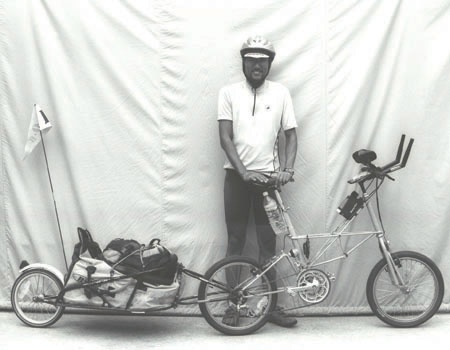 “I thought that the period of this trip was going to be a comma for me, or the half-time between the first and second half of my life, but it turned out to be the best time so far.” Those are the words of Euntaek Hong, a Korean cyclist who rode across country on the TransAmerica Trail in 2005.

Euntaek worked in Washington, DC, as a foreign correspondent for a major Korean newspaper from 1996 to 2000. After a brief time back in Korea, he decided he wanted to see the “real America,” so he enrolled in graduate school at the Missouri School of Journalism. During a break between semesters, he drove across the country and was shocked to see cyclists pedaling up the Rocky Mountains. Right then he decided that he had to do it too, but he wanted to start at the Atlantic Ocean.

It’s always interesting to see what international riders observe when they ride across America. In Euntaek’s case, he noticed the choices of food. “In a country like Korea,” he said, “there are many regionally distinctive cuisines. But in America most café menus are the same all across the country; omelets, pancakes, and lots of eggs for breakfast; sandwiches, hamburgers, and salads for lunch.” He goes on to add, “By the way, the difference between sandwiches and hamburgers is indistinguishable to me. Both are a combination of two breads with something in between.”

You can read about this and other observations from his trip in the book he wrote about his tour. There’s a bit of a catch though, as it’s the only book ever published about the TransAmerica Bicycle Trail that is written entirely in Korean.

When we heard from Euntaek after the trip, he said that because of the book he had suddenly become a somewhat famous bicyclist in Korea. “So I have to ride my bike every day to keep up the reputation. And now, I am preparing a book about commuting on a bike in such an crowded and unfriendly bike city as Seoul.