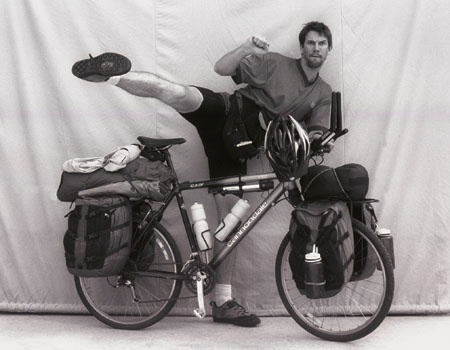 Don’t let this photo fool you. Even though Chris Shevchik looks fierce in this shot, he is actually an amiable fellow. A seventh-grade science teacher from Illinois, Chris had always wanted to ride his bike across the country. He also thought that it would be more challenging to do it solo. While some people feel that traveling solo might not be safe, Chris isn’t one of them. With an adventurous spirit and a black belt in karate, he felt more than prepared.

So in June of 2004, he started out from Seaside, Oregon, headed to Bar Harbor, Maine. The beginning of the trip was somewhat difficult for him. For starters, his pedal fell off at the four-mile mark. He also fell off of his bike trying to punch an Oregon tunnel-alert button. Mostly though, he really did not enjoy riding with traffic. But as hard as those first few days were, he was determined to continue. Chris decided that the best way to overcome his discomfort with traffic was to just pick up the pace.

Consequently he never took a day off, riding 3,700 miles in 42 days. Since Chris was traveling alone, it made it easier for him to find free places to camp. He says, “Camping in remote places was one of the best parts of the trip. I never spent a night in a motel or campground.” He chose to stay along the side of the road, under bridges, and in fields. Not accommodations for everyone, but just right for a solo traveler with a black belt.

For a trip that started off somewhat rocky, he certainly seemed excited afterwards; from the people that he met along the way, to obstacles overcome, and just the pure enjoyment of travel. “As time goes by, I miss that experience,” Chris says, “as I know it will be a once in a lifetime event for me.”