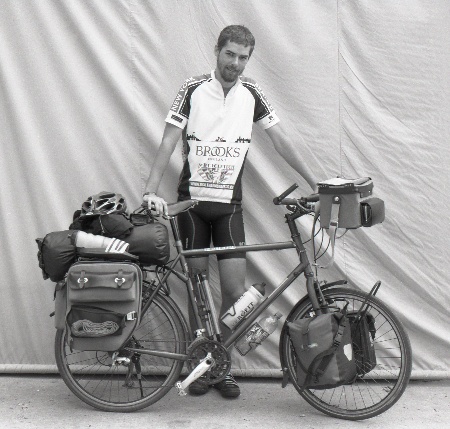 Though only 21 years old, Thomas Hassig of Switzerland chose an ambitious route for a first ever bicycle tour. He set out from New York City on May 2, 2010, with Seattle, Washington as the goal.

And he had an equally ambitious schedule, for he arrived in Missoula on June 11 just five weeks later. That meant maintaining at least a 70-mile per day average for the 2,500+ miles. Nonetheless, he seemed to be in no particular hurry when he dropped in to our Missoula office on that Friday afternoon, taking the time for his portrait and some ice cream from the freezer.

“I’ve climbed the hills of New Jersey and Pennsylvania. Rode through heavy rainstorms and snow in New York and Ontario, Canada. Went over the flooded roads of Michigan. Rode through the beautiful valleys of Wisconsin. Across the endless flatlands of Minnesota and through the Badlands and Black Hills of South Dakota. Over the Big Horn Mountains and on to Yellowstone Park in Wyoming. And I have just arrived in Missoula after cycling the Rockies in Montana.”