A Turn For The Nurse 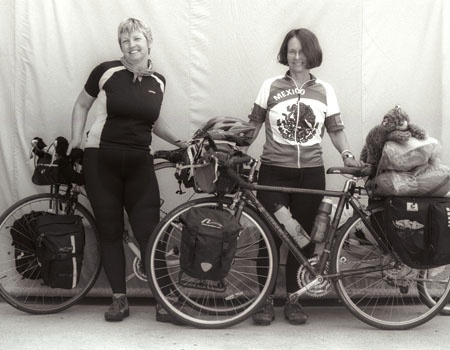 While many people get excited about taking a long bike tour, Laura Hienonymus (pictured left) had been anticipating and planning one for many years. Laura states, “After one husband, five moves and two children out of college, I am finally going on my dream trip. This trip was a culmination of a dream that I had when I missed out on the original Bikecentenial cross-country tour. I was just getting into biking and knew people going. From that point on, I had a dream of taking that trip.”

In 2006 together with fellow nurse Claudia Ritter and her stuffed cat Randy (pictured right), they decided to ride the Lewis & Clark Bicycle Trail from Astoria, Oregon, to St. Louis, Missouri. The trip to the West Coast seemed to set the tone for their journey. They decided to take the train, and right away started interacting with their fellow train travelers in what Claudia described as a “two-day slumber party.”

The cycling part of the trip really lived up to their high expectations as well. And, as seems to be the case time and again, their strongest memories were of the people they met along the way. There was the couple that fed them fresh rainbow trout one evening for dinner, and another couple that “forced” them to eat eggs and bacon (thick cut) in their RV as it was raining outside. While they finished their meal, the sun came out. That must have been some magic bacon.

The trip has continued to stay with them well after it was over. There were so many other instances of people going out of their way to help them. Claudia stated, “We were spoiled rotten with attention by kind and curious strangers. I hope that we are passing along positive energy, because there’s plenty to go around.” That sounds like a great thing to hear from someone in the nursing profession.