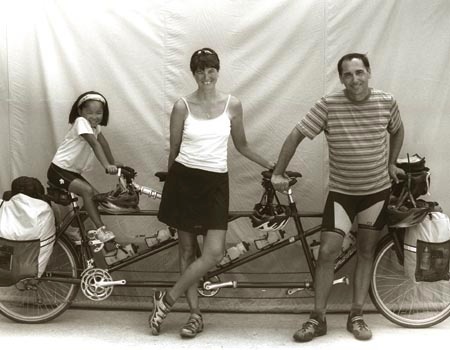 When most families decide to move across the country, they hire movers and then drive to their new home. Elizabeth, Kate, and Ron Nunes of Jacksonville, Florida, were making a cross-country move in 2006 to Poulsbo, Washington, and decided that the best way to get to their new home was to ride their bike. While it’s not often that folks move to their new home on a bike, it’s even more rare when the whole family can do it on one bike, a triplet.

The Nunes rode 4,350 miles, through 16 states in 101 days with sometimes two, and sometimes three people pedaling. Three people pedaling one bike should be able to go pretty fast, but Elizabeth, age six, said that occasionally her parents questioned how hard she was pedaling. But when her dad called for greater speed, then she could kick in the afterburners.

Perhaps it was the ice cream. She found it interesting that on a bike trip, her parents, who usually don’t let her eat sweets, were heard to say, “Let’s get some sugar in you.” But planning a long-distance trip on a triplet with a six-year old requires a bit more strategy than sugar. Her parents broke it down for her by saying that a long cross-country ride was just a series of day rides. Plus, she got to bring her teddy bear along, who sat next to the treats in the handlebar bag that was filled with treasures that they collected along the way: pieces of ribbon, a magic wand, and rocks. That’s right, rocks.

It sounds like one of Elizabeth’s absolute favorite parts of bicycle touring is meeting new people each day, and getting to tell the same, pertinent knock-knock joke over and over.

There’s no way you can forget that.