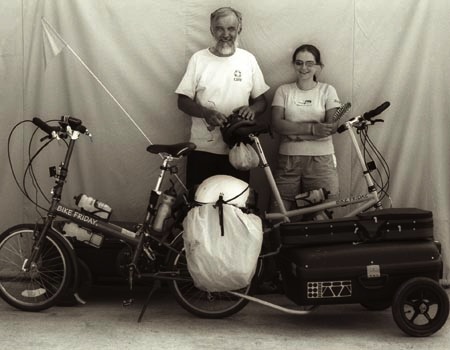 Leila Barker had only ever taken one bike trip before 2005, a weeklong family trip in northern Pakistan. Her father was the impetus behind that journey, she was only fourteen at the time, but the memories from that trip helped inspire this one.

Leila’s father Paul was able to start the trip with her in Astoria, Oregon, and ride for three weeks, leaving her to complete the cross-country journey to Savannah, Georgia solo. He wasn’t worried about her traveling alone though, in fact, he was quite impressed with her planning. “This trip was entirely Leila’s brainchild,” he said. “She made brilliant gear selections, charted the route, and provided the live music with her violin.” While traveling with a violin strapped to the top of her trailer was unique, perhaps the most unusual aspect of her trip was having it funded through Emory University’s undergraduate research program.

A double major in biology and music, Leila came up with the idea to combine her two areas of study in a research trip. She carried with her a handheld digital recorder to take recordings along rivers. Her goal was to try to understand what water sounded like in a natural and artificial setting by capturing sounds and using a computer to incorporate them in an acousmatic music composition.

“Since you’re always in such close contact with your surroundings,” Leila says, “Riding a bike is great for this.” She ultimately ended up with a wide variety of recordings including mountain streams, heavily trafficked bridges, a fish ladder, a geyser, and fish jumping in a lake at midnight.

While this was somewhat of an educational trip, Leila still experienced all of the joys of long-distance bicycle travel. She added, “Riding across the country, I can recall thinking constantly that there was nothing I would rather be doing — even the hardest moments were enjoyable.”