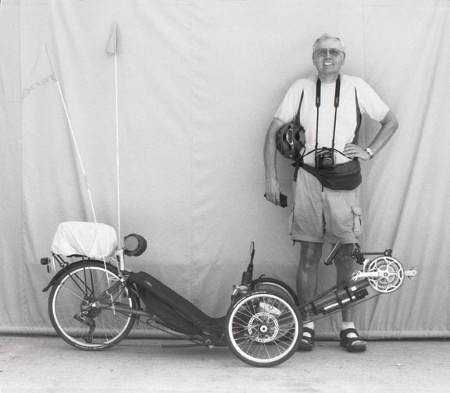 When computer programmer Merle Knotts retired, he decided he was not going to just sit around, not on a couch anyway.  Instead, in 2007, he set out from his home in Marietta, Georgia, to cycle to Oak Harbor, Washington and attend his 50-year high school class reunion. Though his wife, Jan, accompanied him driving an RV support vehicle, at 68 years of age some would say that he was being too ambitious. But he did just fine in spite of a 2004 titanium knee replacement. In addition, Merle was diagnosed with multiple sclerosis in 1980, and at one point in his life was unable to walk. He wrote, “My MS has settled into a mostly sensory impairment pattern, leaving me free to get around and do almost anything I want to do. I feel blessed that after nearly 30 years of having the disease it seldom involves my motor skills.”

Nonetheless, we can only admire Merle’s pluck and enthusiasm.

During the course of his 3,420-mile journey he raised more than $14,000 for the Georgia Chapter of the Multiple Sclerosis Society.

Merle was riding a Catrike equipped with 3 chainrings, 9 freewheels and a 3-speed hub, giving him a grand total of 81 gear choices. He said that Missouri was the only state where he used the full range of gears from first to eighty-first.