A Man Of Record 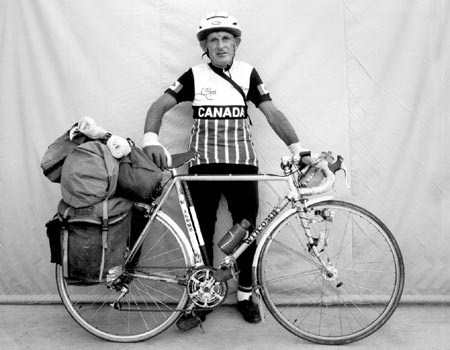 John Hathaway was a legendary bicycle tourist long before most bicycle tourists were off of their training wheels. When Hathaway, an Adventure Cycling member, passed through Missoula in the summer of 1993 on his 30,000-mile, 24-month tour of the U.S., he was 68 years old.

Hathaway had ridden about 110,000 miles since he began touring in 1953. In 1955, he pedaled from Vancouver to Montreal via New Orleans. A Trans Canada ride, Halifax to Vancouver, took him only 24 1/2 days and gave him the Trans Canada world record, a record that stood for 20 years. "I had to cover 1,000 miles of that on gravel roads," he said in the Toronto Globe and Mail in 1998. "The Trans Canada Highway didn't go all the way."

Adventure Cyclist contributor John Rakowski rode briefly with Hathaway a few years ago in Caracas, Venezuela. "Though a short, slim man, he was all muscle - his body looked made of tangled rope - and I wasn't able to keep up with him," wrote Rakowski.

Hathaway, who began cycling as a racer in England at the age of 18, compiled a list of the health problems and cycling injuries he's suffered from since 1950. Among the more remarkable include a broken hip in 1972, of which Hathaway writes, "Secured with three pins, still in, no problem." In 1987, he was hit by a truck while riding in Argentina. He listed his injuries as "Broken back, two compressed vertebrae, no problem."