A Guitar, A Dog, & A Surfboard 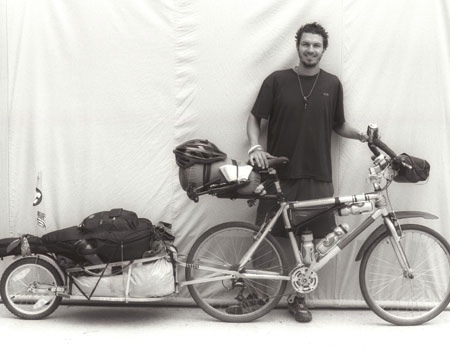 Benjamin Miler pedaled solo from Nebraska to the West Coast in the summer of 2007. “I’m very glad that I did it alone, although I was nervous about that at first,” he said. Solo travelers seem to be able to get into a special mindset, which Miler described when he said, “Many times on my trip I let go of my handlebars and forgot about my legs pushing me forward. I would just be soaring across the earth at the perfect pace with the wind in my face.”

Though he wasn’t riding with other folks, Benjamin acquired other companions that you wouldn’t necessarily associate with a bicycle traveler. It started with something simple, a guitar (pictured) he purchased in Jackson, Montana. He kept it for a couple of weeks before pawning it in Idaho. Soon afterward, he adopted a six-week-old beagle/border collie mix in Mitchell, Oregon. So he turned his trailer into a doghouse for “Mitchell.” A few days later, he stopped to read his journal to a blind woman named Ester. Ester was living in an assisted living home and the manager of the home fell in love with the pup. So Mitchell now is dispensing his love and attention to the residents of the home.

Arriving at the coast in Oregon, Benjamin wanted to keep moving, so he decided to sample California. Naturally, he then bought a surfboard. To carry the board, he built a trailer using a threaded rod, a bike helmet, and two lawn-mower wheels. He attached this to his BOB trailer and took off, surfing every day along the way.

Benjamin eventually ended up in Tacoma, Washington, where he enrolled in barber school. His surfboard now serves as his coffee table. He plans on riding east on the TransAmerica Bicycle Trail when he finishes school. Which makes you wonder what he’ll pick up on that trip. Will it be a milking machine, a parakeet, and a beach umbrellaω Or a circular saw, a croquet set, and a set of encyclopediasω Or perhaps an espresso machine, a satellite dish, and a hula-hoop.