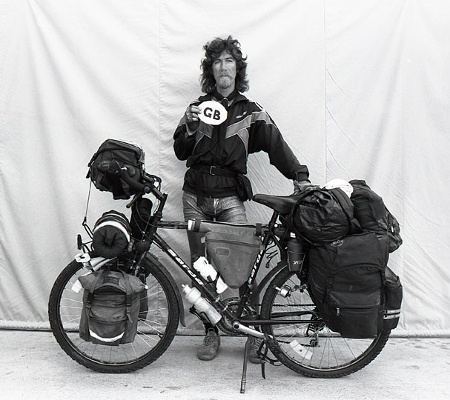 Julian Uribe was deep into a round-the-world tour when he showed up at our office in September of 1993. He set out from his home in England and had ridden through Central Europe, Scandinavia, Russia, Turkey and North Africa. (In 1989 he had ridden from England to India, so this was his second big tour).

He flew to Seattle and rode through 12 western states on his way to Mexico. A map he provided to us with his western U.S. route highlights his unique riding style. While most long distance riders hold to a fairly straight and direct route across the country, Julian’s route wavers and wiggles from Seattle to Mexico to an extent that it is clear that he rode more than twice the number of miles he needed to. He doesn’t miss a thing.

From Mexico he continued south, eventually reaching the southern most tip of South America. Then he was off to Africa for more serious touring. We’ve lost track of Julian. The last reference to him that we’ve seen was from a news item in 2006 indicating that he had ridden through 60 countries in the past 17 years and was planning his next trip.