Your Support is Needed for Oklahoma's USBR 66 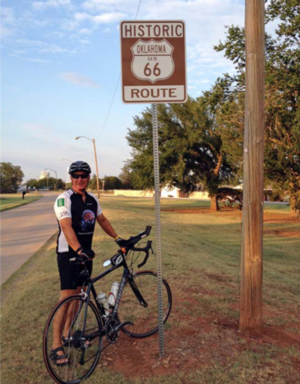 Kevin Mussett, a member of the Oklahoma Bicycle Coalition, rides on Route 66.

Oklahoma is one of America’s best kept secrets. I heard this many times from Tulsa locals while I was at their statewide bike summit, and by the time I left four days later, I was convinced. Oklahoma has diverse landscapes with forests, lakes, hills, plains, agricultural land, and many great opportunities for bike touring and even mountain biking. 450 miles of the historic Route 66 go through Oklahoma, which is more than any other state, and the route was recently designated as a historic bike trail. The Chisholm Trail was also recently designated as a historic bike trail and follows the north-south corridor between Texas and Kansas where the largest cattle drives in the world took place in the late 1800s. The state also has a strong biking community, is home to many top-notch biking events and trails, and Oklahoma locals are arguably the most hospitable and gracious hosts in the country.

But this is not a tourism advertisement, it’s a call to action. Oklahoma is such a great place for cycling but currently has no national bicycle routes. There is now an opportunity to get both Route 66 and the Chisholm Trail designated as U.S. Bike Routes. This would open up great prospects to attract bicycle travelers nationwide, help build bicycle tourism, grow Oklahoma’s economy, and put the state on the map as a cycling destination.

You can help make this happen. 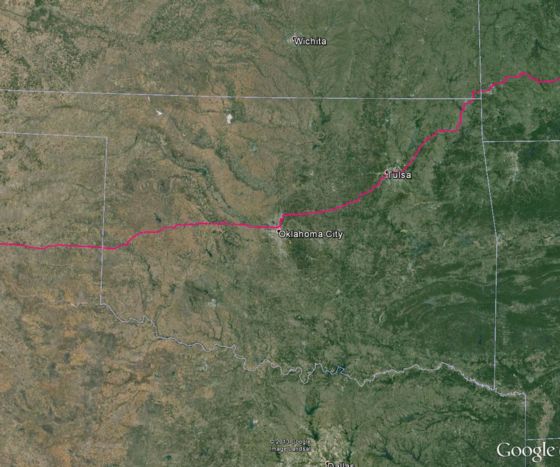 The proposed route for USBR 66 through Oklahoma

But first a little background. The Oklahoma Bicycle Coalition (OBC), a statewide bicycle advocacy group, has been working for the last two years to get the necessary support for designation of Route 66 as a U.S. Bike Route. Members from the group visited 30 communities along the route and gathered letters of support for designation. In early 2013, the OBC met with the Oklahoma Department of Transportation (ODOT) and asked for the final signature from ODOT’s deputy director on the USBR 66 application. ODOT voiced concerns about the route’s roadway facilities being unsafe for cyclists, so they were ultimately unsupportive of designation and the application was never signed or submitted.

Fast forward to January 16, 2014. House Bill 2812 was introduced to the legislature and directed ODOT to seek U.S. Bike Route designation for Route 66 and the Chisholm Trail. This bill would provide the necessary backing to get these two routes designated as U.S. Bike Routes, and presents a unique opportunity for cyclists to voice their support for USBR designation. HB2812 is currently in the House Transportation Committee, and will tentatively be voted on by February 27.

Please send a letter or email by February 27 to Charlie Joyner, Chair of the Transportation Committee (address below), or your representative, and let them know that you support USBR designation of the Historic Route 66 Bike Trail and the Historic Chisholm Trail Bike Route. If you have ridden in Oklahoma on 66 or US Highway 81 where these routes are proposed, let them know that these routes are suitable and safe for the seasoned bicycle travelers that will be using them. If you live in a town along the route, consider mentioning the many economic benefits that bicycle travelers bring to rural communities. Oklahoma’s legislature needs to hear from both out-of-state cyclists and locals who support the development and designation of U.S. Bicycle Routes through the state, and can help the decision-makers understand the many health, environmental, economic, and social benefits of cycling and bicycle tourism.

Thanks for your support in helping Oklahoma to become the first state to designate USBR 66. Designating Route 66 and the Chisholm Trail as U.S. Bike Routes will open up new ways for cyclists to explore Oklahoma’s many scenic, historic, and cultural attractions. Oklahoma can be America's best kept secret to be shared among cyclists.

Send letters or emails to:

Photo courtesy of Bonnie Winslow of the Oklahoma Bicycle Coalition