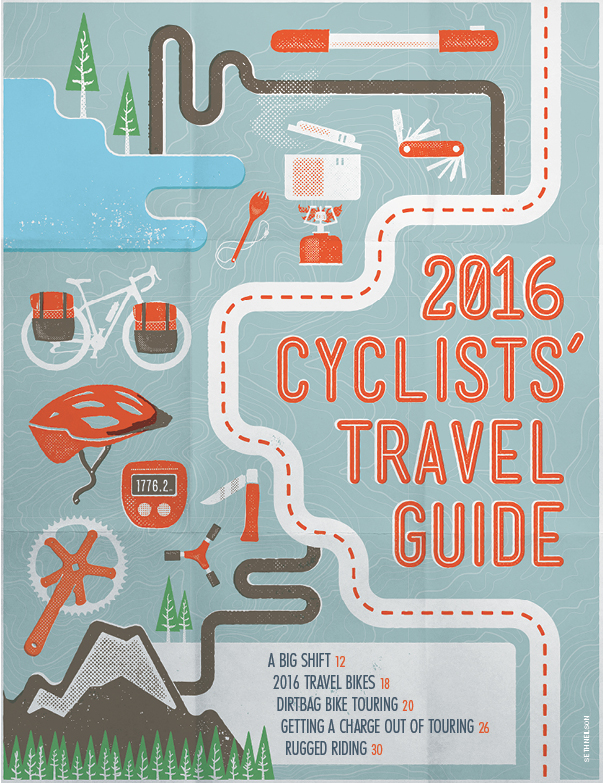 The April issue of Adventure Cyclist, landing in your mailboxes sometime this week, is the largest issue we’ve ever published — and at 76 pages, a special nod to our founding year. Good thing, too, because our annual Cyclists’ Travel Guide continues to grow as we try to cram more technical insight, touring trends, and (we hope) helpful information into each edition.

Though we announced it a few months ago, the April issue is new Technical Editor Nick Legan’s big splash in the pages of Adventure Cyclist. We’ve been planning the issue’s guide with Nick, a former pro mechanic and bike shop owner (not to mention former tech editor at VeloNews magazine) for more than six months to find topics that needed tackling. The result is that Nick researched and wrote stories about touring on eBikes and full-suspension mountain bikes (including a Road Test of the genre-bending Rocky Mountain Sherpa) and gathered advice from bicycle travelers of all stripes for a fun feature on “Dirtbag Touring,” a term we use with much endearment.

The guide opens, though, with a topic that absorbs many of the office conversations among Adventure Cyclist staffers: drivetrains. In the 2015 Cyclists’ Travel Guide we examined what we called “The Drivetrain Dilemma,” the dearth of loaded-touring–appropriate drivetrains in the wake of component giant Shimano’s decision to end cross-compatibility between drop-bar shifters and mountain bike drivetrains a few years ago. In the 12 months since that piece was published, the ground beneath the market has shifted as “adventure cycling” and “gravel grinding” took center stage among manufacturers. The resulting deluge of options from both mainstream parts makers and plucky startups has given the touring cyclist more options for low and wide gearing than at any other time in recent memory. They're not all cheap, but these new options should open up opportunities for those with blank checks as well as the garage tinkerers searching for a magic bullet to solve their shifting on a shoestring. Bicycle Retailer & Industry News’ Matt Wiebe, who enjoys a glimpse at the latest trends thanks to his extensive reporting from Asia, lights the way. 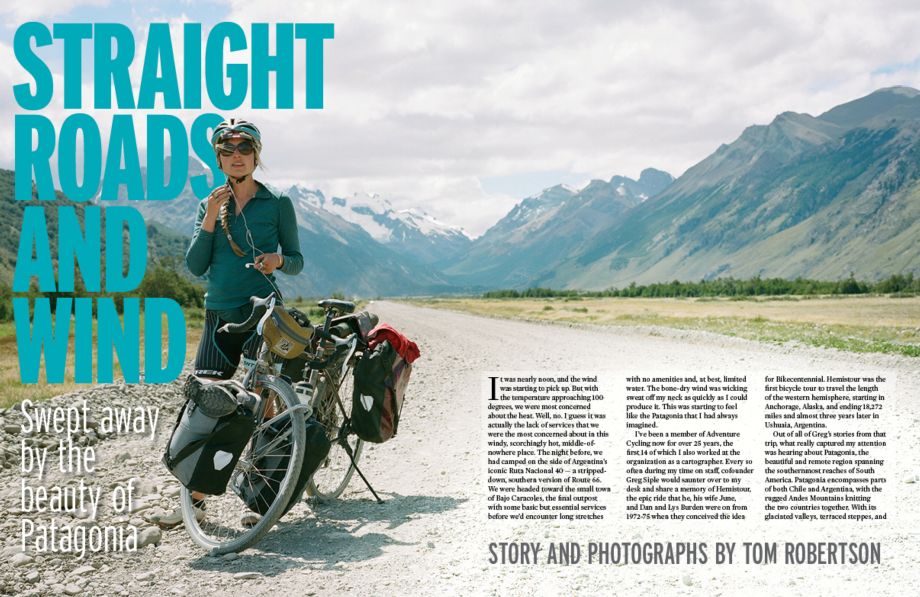 Finally, though this issue is pack-jammed with the technical, it’s also visually arresting. The aforementioned Cyclists’ Travel Guide opens with fantastic illustrations from Seth Neilson (@sethsquatch), whose “My Outdoor Alphabet” series is well known across the web. Farther in, frequent New York Times contributor and Montana-based photojournalist Lido Vizzutti (@lvizzutti) — who, full disclosure, is an old friend — brought an up-market vibe to some decidedly down-market solutions to save money on your next tour. Then, once out of the Guide, you hit the spectacular photos from Patagonia — also gracing the cover — from regular contributor Tom Robertson (@thrphoto). Tom took this trip over a year ago and we’ve been sitting on a pile of incredible shots since, doing our best to be patient. 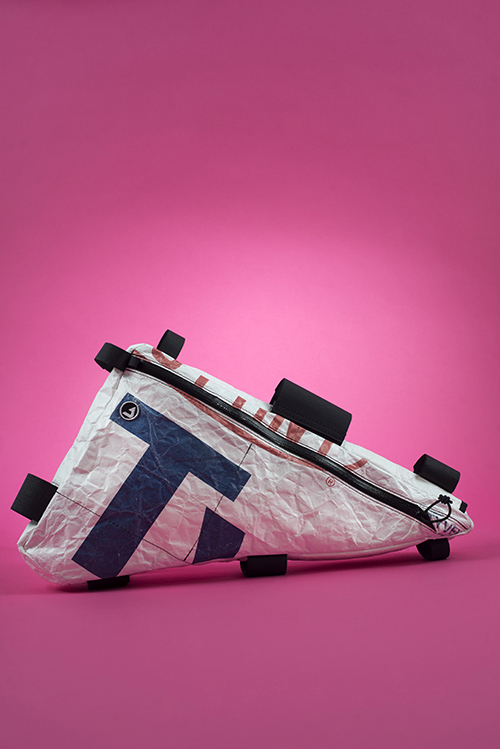 The issue also features a profile from founding editor of Bicycle Times Karen Brooks (@k4renbr00ks) on the long-distance racing phenom Lael Wilcox, who shattered the Tour Divide record (twice!!) in 2015. But Lael, while a gifted racer, is a bike traveler through and through, and she and partner Nicholas Carman have traveled the world on two wheels.

Adventure Cycling cofounder June Siple writes about how she and the other three founders managed, in 1973, to get a story in National Geographic that introduced a massive audience not only to their Hemistour expedition, but to the very idea of bicycle travel. It’s a fascinating behind-the-scenes look at their experience and also at a publication that influenced countless cyclists and adventurers, present company included, at the peak of its powers.

If you’re still reading, you won’t be shocked to hear that I love the April issue. Though any issue of the magazine represents months and sometimes years of planning, the Cyclists’ Travel Guide in particular is the result of a sustained effort by many people for many months to produce what I think is the best single issue of Adventure Cyclist ever. A huge thanks to Nick Legan, Lead Designer Cassie Nelson, Copy Coordinator Dan Meyer (who also penned a number of sidebars for the drivetrain update, fully immersing himself in some less-than-widespread technologies), and Executive Editor Mike Deme, who gave us a lot of room to run on this one.

Now it’s back to the May issue, which heads to the printer in three days. Wish us luck!

I want to have your October issue. Your travel guides really helped me and my Morpheus bike since then. Cheers!

Nick Legan will be a nice addition. I really liked his columns at VeloNews.