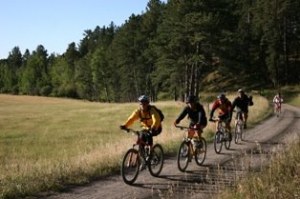 Where in the world is the best place for bicycle travel?

Tough question, no doubt, and anyone’s answer would have to be subjective — I mean, who on Earth has cycled everywhere?

That said, according to Duncan Christy, editorial director of Four Seasons Magazine, the best places for bicycling are Tuscany, the Dordogne River Valley of France, and Nantucket Island, Massachusetts.

Susan Greenwood, writing for the Guardian newspaper in the United Kingdom, in her Top 10 Bike Rides of the World includes places like Port Phillip Bay in Australia, Norway’s Jotunheimen National Park, and Whitehaven to Sunderland, U.K. She also lists two rides in the United States that are both — not coincidentally, I would guess — segments of our TransAmerica Bicycle Trail: Highway 12 from Lolo Pass to Lowell, Idaho, and Dubois to Grand Teton National Park in Wyoming.

Or, if you buy into National Geographic’s top-ten cycle routes, you’ll agree that the best rides are distributed throughout the world, in Canada, Chile, Australia, Vietnam, Italy, France, Belgium, Britain, South Africa, and the United States, where their selection is none other than — ta da! — Adventure Cycling's Underground Railroad Bicycle Route.

If I had to pick one out of all the places I’ve ridden, I’d say my favorite day ride was through a stretch of empty country on the Great Divide Mountain Bike Route, between Hartsel and Salida, Colorado. The riding flowed like water on that July day, as we wended our way over smooth gravel through swatches of Old West terrain where I half expected to see a herd of bison come storming through every next gap, or a party of painted Pawnee on horseback straddling a distant ridge.

If somebody held you down and wouldn’t let you up until you answered the question, where would you tell them is the best place in the world for bicycling?

Anyone have a suggestion for 2 days of road cycling near Santiago Chile on 11/12 October?

Just returned from California and my vote is this state - great cycling routes.

Enjoyed this article - thanks