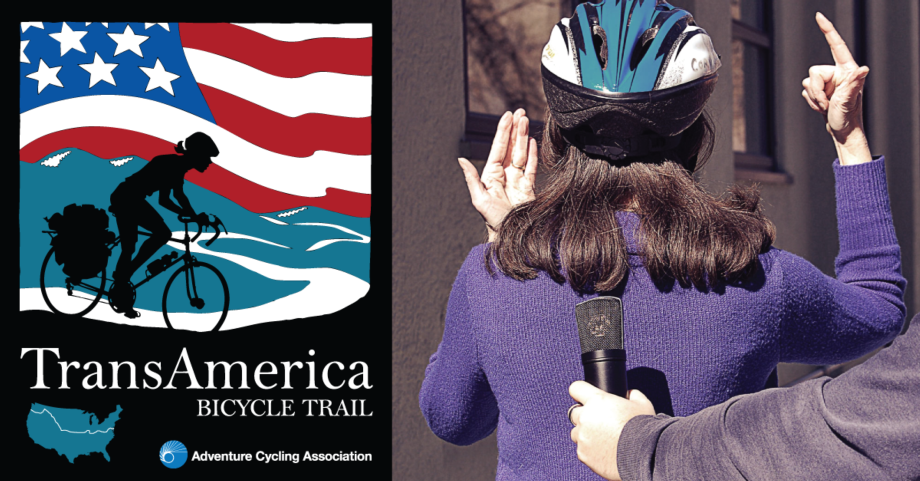 On March 21, 2016, I sat down with Emelia Hacia Atrás, the “Backward Bicyclist,” in Mort’s Bikes in Larned. I asked her to tell me the story of how it came to be that she was riding a recumbent on the TransAmerica Bicycle Trail, facing east while proceeding west. The following is what she told me.

“For almost all of my life I have considered myself a conformist, una conformista. I married young, had five children, went to church on Sunday, did pretty much whatever my husband, Mauricio, told me to do. But when I turned 60 two years ago, something clicked. With the children all grown and on their own, I decided I was going to do things differently from that point on; no longer would I be a traditionalist. I taught Mauricio how to cook and do laundry. He resisted at first, but eventually grew to enjoy it. Well, the cooking anyway.

“As I adopted my new lifestyle, I did research on how others through time have managed to go against their societal norms, yet be accepted by others. I learned about an extreme and unique example among the 19th century Plains Indians of your country. Known as “Contraries,” they were rare individuals who deliberately did the opposite of what others did in social situations, and meant the opposite of what they said. ‘Hello’ meant ‘Goodbye.’ ‘Come here, child’ meant “Go away, child.’

“Early on I thought I might become a Contrary, but decided that this would cause too much confusion in today’s culture, where the concept is not known or understood. It would be hard enough for my people to accept that I wanted to have an adventure.

“I studied the available options and possibilities. After weeks of research and pondering, I settled on bicycling across America, and perhaps then continuing on around the world. What could be more adventurous, and less expected, for a Mexican housewife to take on than a solo bicycle adventure?

“Then it hit me: I could behave like a Contrary in this endeavor. The Contraries would walk backwards to get to where they said they were not going. I would bicycle across los Estados Unidos backwards! This would make me truly una inconformista!

“As I studied up on touring bicicletas, I came to the conclusion that it would be easier to do this on a recumbent than on an upright bicycle — if I could find a bicycle expert who could switch the drivetrain and steering mechanism around for me. I mean, you lie down to ride a recumbent anyway, so why does it matter which way you’re facing? Add a few mirrors to the mix and I’d be ready to go, lista para ir.

“With help from a local bike shop in the town Escuinapa near my home, I found a recumbent builder of some repute in Netzahualcóyotl, outside Mexico City. We had long telephone and email conversations. Mauricio agreed to cough up the money I needed, and Juan Hidalgo-Jones, the bike builder, worked magic. Now, as you can see, I’m pedaling normally, pushing rather than pulling on the pedals, to drive the bike forward … or backward.

“That reminds me of a question that has been raised by dozens of reporters and people I’ve met on the street, so I’ll answer it before you ask it, Señor Backster: ‘Those large mirrors you use for navigation — would they be considered rear-view mirrors or front-view mirrors?’ I tell them ‘rear-view mirrors’ … but of course in this case the Contrary in me comes out, and I actually mean ‘front-view mirrors.’

“Hello, I must arrive now.”

With that, Emelia pedaled off to the west — looking at me, waving, grinning, and emitting a sweet, hearty laugh. - Ted Backster, KSNC News