Wild Ride on the Road to Building the U.S. Bicycle Route System 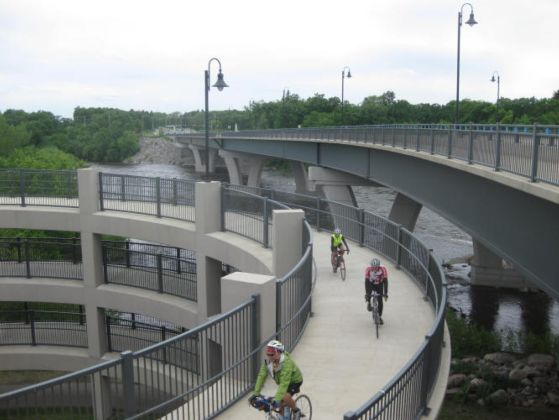 There is so much to tell about my recent wild ride to Minnesota and Ohio that I am breaking the story into two pieces. I'll start with my travels in Minnesota where I had the opportunity to cycle, meet, present and listen to various people that will soon be involved in the U.S. Bicycle Route System.

The trip started off with a ride on the Paul Bunyan Trail near Baxter and Brainerd, MN. I rode about 20 miles of the trail with about 25 other cyclists, including Representative James Oberstar, head of the House Committe on Transportation and Infrastructure. After admiring my U.S. Bicycle Routes jersey, he motioned me over during a water stop and we chatted about the amazing work being done in Michigan and how bicycle tourism could positively impact Minnesota through implementation of U.S. Bicycle Routes. He reminded me that he values and supports the project and has it written into his draft of the new federal transportation bill (currently sitting in limbo until later this year.) I thanked him, of course.

I also met Louis Moore, president of the Major Taylor Bicycling Club of Minnesota. Louis told me about a National Cycling Summit being hosted in partnership with the National Brotherhood of Cyclists on July 16-18 in St. Paul and Minneapolis. The goal is to build excitement about bicycling and work collectively on ways to diversify the cycling community. I told him about our partnership with the University of Pittsburgh's Center for Minority Health and our future expansion of the Underground Railroad Bicycle Route.

The following day, I met with Tim Mitchell, Greta Alquist, Liz Walton and Dan Collins from the office of Transit, Bicycle and Pedestrian section of the MN Department of Transportation (DOT) along with Dorian Grilley and Nick Mason of the Bicycle Alliance of Minnesota and Mike Juvrud, a route researcher, trail enthusiast and Adventure Cycling volunteer from Glenwood, MN. A lively discussion ensued, and it was determined that implementing the Mississippi River Trail as the first MN USBR would be the gateway for understanding the process, allowing additional U.S. Bicycle Routes to be developed efficiently in the future. Mike offered to begin initial outreach in "Greater Minnesota" while the group felt that there were many existing and emerging opportunities that could be made across the state.

Greta, Nick, Mike and I then took a bicycle tour of St. Paul (mmmm, they have some work to do) and Minneapolis, which offered fabulous urban riding with a visit to the Stone Arch bridge and the MidTown Greenway, a fine way to cap off the tour.

Stay tuned for the rest of my trip, which culminated with numerous events in Cincinnati, Ohio. The wild ride continues!