Why would I want to ride in Oklahoma? Well, my three buddies and I, one a persuasive Sooner, chose to ride there as part of our annual "Old Guys Tour." Two facts clinched the deal: one, Adventure Cycling had just released its Bicycle Route 66 maps and, two, Oklahoma would be the 47th state of my 50 state bicycle quest.

What I did not expect was an Oklahoma gift of eight days and 400+ miles of rolling terrain, warm weather, great local food, nostalgia about a time that preceded my car-awareness, great friends, and a step back into time on The Mother Road. 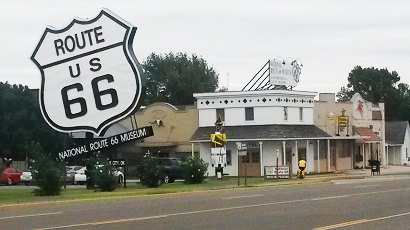 I was thinking that I would just be riding a route with a with a brown sign indicating that I was on a road bypassed by time. I was surprised! Oklahoma has embraced its past and made Route 66 a tourism destination for the state. 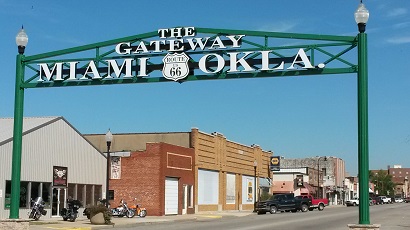 Small town America is what I expected to see and experience all along Route 66 and I was not disappointed in the least. Although Oklahoma City and Tulsa are cities in their own right, small town America was gushing all across the state from Erick in the west, home of Roger Miller, to Quapaw in the east.

Those that know me, know food is never far off my mind and exploring the diners along our journey was a real treat. I carried the Route 66 Dining & Lodging Guide along in my pannier because immediate access to food information is important to me! 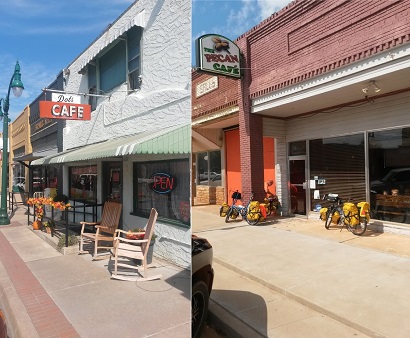 While I was getting my handlebars rewrapped with yellow tape in Claremore, I took a stroll down to Dot's Cafe to enjoy the special stew on the menu and what was hands down the best peach cobbler, EVER!

Southern cooking was the special on the menu for lunch at the Pecan Cafe a few days earlier in Wellston. It's not jambalaya without andouille sausage and they served up plenty of it with great fried okra and homemade cornbread. Did I mention the sweet tea?

One of the most amazing aspects of the Oklahoma Route 66 section is the myriad of historical sights that can still be seen. I had read about many of them before I started riding, but I discovered many more along the way. 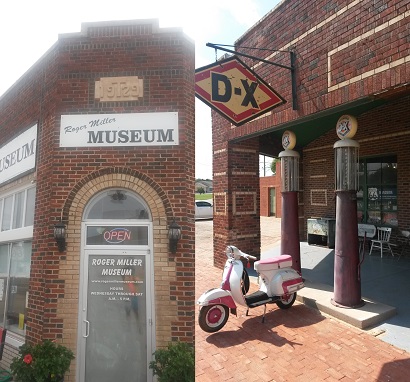 We began in the hometown of the King of the Road, Roger Miller, and eventually saw a sign that read "trailers for sale or rent," but no rooms for fifty cents. We thought thirty minutes would suffice for a visit to the museum in Erick at the start of our tour; two hours later we departed.

My friend Dave restores vintage gas pumps and there were plenty of pumps to critique along the way with all the restored garage buildings. 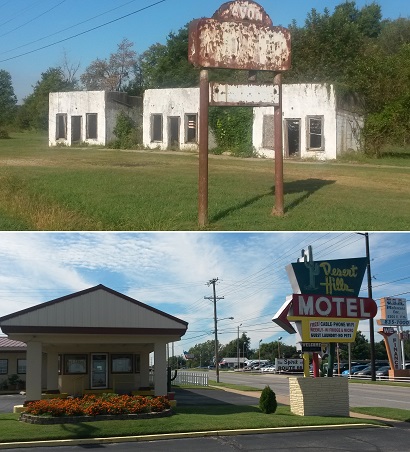 What started out as a camping trip quickly turned into a classic Route-66-motel-with-neon-sign-trip, though we carried tents all week. Many of these iconic motels have fallen by the wayside, but a few classics remain and pride themselves on catering to history buffs, including a few with cigarette burns on the bathroom sinks where cigs of the past were carefully balanced until the last drag. 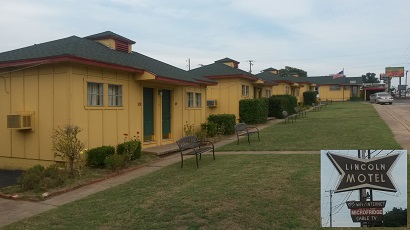 I enjoyed the overnights in every little motel we chose. Upgraded with "Free Wifi" and "Cable TV" signs, these small, clean, low-budget accommodations in the heart of small town America enhanced our experience. I wouldn't do it any other way. Immerse yourself.

If you are interested in cycling Route 66, take a peak at Adventure Cycling's Bicycle Route 66 maps or perhaps take one of our van supported or self contained tours on Bicycle Route 66. You are in for a ride down memory lane, through history, and with some great cycling.

As for me, Bicycle Route 66, Sante Fe, NM to Flagstaff, AZ, has made my bucket list as a direct result of riding across Oklahoma!

Hi Arlen, Enjoyed your article on Route 66. Loved the photos!!! Just wondering when you rode across Oklahoma? Thank you very much

Thank you for the compliment. My tour was September 19-26, 2015 Erick, OK to Gelena, KS. Temperatures ranged from an overnight low of 50 to a high of 92 one day, but usually in the low 80's. Always a wind from some direction.

Thank you Brian. Now that I see what Route 66 has to offer, I know you are going to have a great ride. Glad you agreed to lead the inaugural tour!.