Where the Tarmac Ends 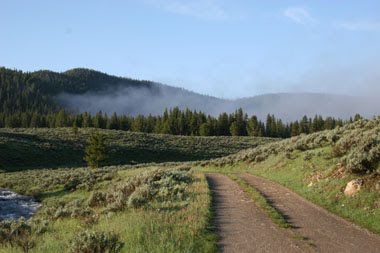 The Rough Stuff Fellowship is a poetically named organization in Great Britain whose beginnings date to 1955. On the home page of their website, they point at that this was "long before anyone had heard of Marin County."

While that's not literally true, it is a fact that 1955 was approximately 20 years before storied riders like Gary Fisher, Joe Breeze, and Tom Ritchey began bombing down the fire roads of Marin County's Mount Tamalpais on their beefed-up klunker bikes. Many regard those hair-raising rides down Mount Tam as the true roots of fat-tire riding.

Now, going back a lot farther than 1955, consider what sorts of track and trail surfaces the Buffalo Soldiers of the U.S. Army's 25th Infantry had to contend with in 1897 to ride their "safety" bicycles from Fort Missoula, Montana, to St. Louis, Missouri. Amazing!

Steve Griffith of the Rough Stuff Fellowshipe wrote an interesting piece on what he considers to be the true history of mountain biking. "Until the 1980s, off-road riding was known as rough stuff, or pass storming," he writes. "The origin of the former is in opposition to smooth stuff (i.e., tarmac). Over the years there has been much debate amongst adherents of this type of cycling as to a definition. To my mind the simplest is perhaps the best: Rough stuff begins where the tarmac ends."

Hear hear! It was with influences coming from those boys and girls who stormed down Mount Tam on two wheels in the mid-'70s that we at Adventure Cycling developed the Great Divide Mountain Bike Route 20 years later, in the mid '90s. But our inspiration came from other places, and other times, as well.

Where the tarmac (better known in America as the pavement) ends: that's where the Great Divide began — and begins.