About 15 years ago, at age 24, never having cycled more than a few miles (except for a 20-mile “training” stint), I jumped on a plane with my mom to ride 40 or so miles a day for two weeks across the southwest corner of Ireland. That’s where I caught the bug — in the drenching rain, climbing nearly 2,000 ft. each day, with daily Guinness breaks at village pubs. It must have been the Guinness!

I’m sure I don’t need to explain the visceral pleasure of touring — being part of the journey, rather than seeing flashes of it through a window in a temperature controlled box — to anyone reading this post. It was both harsh and gritty; and mystifyingly green, gorgeous, and pure. As I’m sure most giddy beginning cyclists must, I decided on the third day into it, that if I could, I would live my life like that.

And while I did choose a less than conventional lifestyle over the status quo, I started a business soon after, and later, a family. And my three children became the biggest (and entirely satiating) adventure in my life.

While I have traveled a bit, and once for a longish period, my kids have grown up to the stories of my short stint in Ireland. They’ve found stashes of pictures and poetry about dark, hollowed-out pubs, stone circles, the sheer, harrowing cliffs along the coast, and continue to have to listen to my speeches about traveling by bike, being one with the elements, and so on. 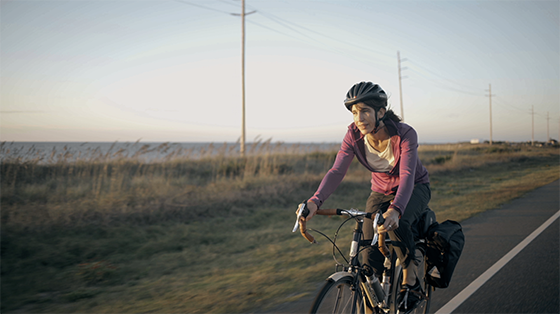 I’m now a single mother and in the first couple of years after my divorce, anything beyond biking my kids to school, or a quick jaunt down to the beach seemed light years away. I lived the typical two-to-three jobs, night-classes-online, and no-sleep, single-mom lifestyle.

But I’ve always forced myself to at least attempt to find moments of peace and solitude, even during times when my mind couldn’t quite go there.

The day of my actual divorce, I road my beach cruiser ten miles in a howling nor’easter, and when I returned I felt as though I’d been washed clean. In the first few months following separation, when my kids would go to their dad’s house, I’d swallow the lump in my throat and either hop on my bike, sprint on the beach, or lay outside in the grass.

My children are everything to me. They have been since the moment I felt them kick in the womb. But, without me, whole, and soul-fed, they wouldn’t thrive in the same way that they could otherwise. 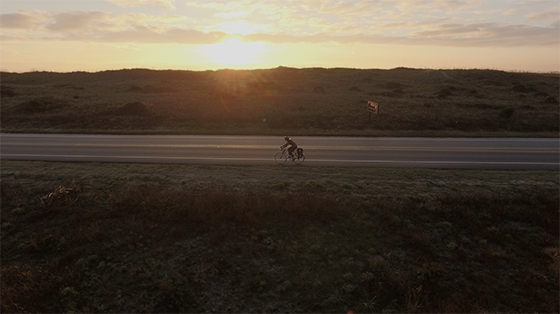 So, when my partner, in work (commercial filmmaking) and now in life, Gary Breece, asked me what I wanted to do for our solo vacation, I said, “Cycling … somewhere.” And the pin on the map in my head just happened to have dropped in midcoast Maine.

So we had our route, a week to do it, the bikes, and the gear; but as a skilled and often maddening multi-tasker, I felt like something was missing. “We can’t go to the coast of Maine without filming it,” I suggested. And because it’s not hard to convince a director/cinematographer that shooting is a good idea, Gary was all over it.

So along with vigorously training my 15-years-more-mature body to get on board, we began storyboarding ideas and designing shots. 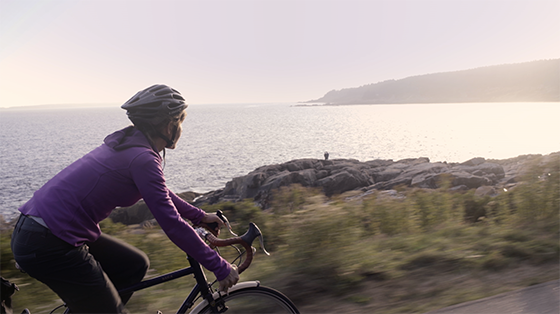 Although, that’s me in the film, and I’d definitely like to say that it fits me, it slightly … doesn’t. I’m quite a bit more stress-y and concerned than it appears here. And I find it very difficult to not have my children with me at any given moment. But I believe in this message, and it’s the philosophy I try to live by. Gary, who directed and shot it, believes in it too, for me, for all mothers, and for the sake of this generation. The premise was actually his idea.

Practicing this as much as possible in the last three years has helped heal me and my children. And as a result, I’ve watched them become joyful, more secure, and more peaceful … as have I.

After all, “if Mama’s happier, everybody’s happier … right?”

Very nice on several levels. First, I am a photo/video teacher of many years at the high school level, so I enjoyed the quality of the video and the story you gave of how it was created. Second, as a biker I really enjoyed the message you gave about why you bike. Third, as a father, and now a grandfather I absolutely loved the line about your children "live what they learn", so true! My younger (adult now) daughter lives close and is my constant biking buddy. When my granddaughter turned two my older daughter bought her a bike. I'm just waiting for her to get old enough so that we can do a three generation bike ride to somewhere. Thanks for sharing!

Raymond, thanks so much for sharing and thanks for your kind words. My little bikers are 8 (twins) and 10 now! Great that you guys are starting your granddaughter so early. You may be riding together sooner than you think! Enjoy every minute. All the best...

On my first day as a young mother I was asked what I wanted for Mothers' Day. I replied that I wanted a baby sitter so I could go on a bicycle ride. I enjoyed a 30 mile ride on my trusty 1 speed.

This is beautiful! Good idea filming it and thanks for sharing. (But I would like to say that not everyone doesn't go out to nature!) ;)