When Is Motorized ‘Okay’? 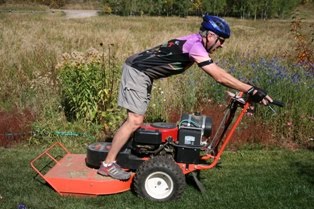 Last week, Frank M., our main man in Colorado, sent me a story from the Denver Post that raises some compelling questions. The piece focuses on a 62-year-old Boulder woman who is trying to do the right thing — the healthy, green thing — by getting to and from work on her bicycle, over trails designated for bicyclists and pedestrians. But not being an uber-athlete, she employs a little power backup to surmount some of the hills along her 7-mile commute.

“... she pushes a button on what she calls her ‘geezerina’ bike,” writes reporter Nancy Lofholm. “A small electric battery tucked in the bike’s frame kicks in, and suddenly it’s as if Lance Armstrong’s legs are doing the pedaling.”

The problem in many cases is that such trails are designated for non-motorized travel only. “Denver treats e-bikes like regular bikes, but Boulder and Fort Collins have banned them on city bike trails — if the bikes have the electrical assist switched on,” the story reports. Compounding the conundrum is that state and federal laws regulating electrical-assisted bikes often conflict with local laws.

As the newspaper piece points out, Segways also enter into the picture. They can be a viable form of transportation, although I don’t recommend following in the late company owner’s Segway tracks, an incident you may have already heard about.

It seems like we should do whatever we can to get people out of their gas-guzzling cars and onto bicycles, power-assisted or otherwise. Yet if we permit e-bikes onto the non-motorized pathways, suddenly it becomes much easier for almost anyone to ride a bike — and the congestion may soon make its way onto the bike paths.

Is there an easy answer? Is it simply a matter of enforcing speed limits and/or horsepower limits, or are we opening the Pandora’s Box of pedaling by allowing any kind of power-assisted two-wheeled machine onto our trails? What about you? Do you, or would you, mind sharing your local pathways with those aboard minimally power-assisted bicycles?

By the way, it’s happening on the roads, too, where it’s a less controversial topic. Check out this fascinating story about Australian cellist Kristin Rule, who’s on tour riding and toting a most unusual outfit.

The author yearns to take a turn down the trail on his DR Field and Brush Mower, which tops out at approximately 5 mph. Photo by Nancy McCoy.

That's funny driving your riding lawn mower backwards but if you are serious consder riding the pocket rocket razor (http://tour-de-bike.com/razor-pocket-review) gas never needed and it comes in multi-colors.

I like the idea. It would make it possible for me to ride again even with my health problems.

I like the idea of getting more people out there. There should be some limit on speed and duration of assist. It is the nature of people to make things go faster than the next guy and be bigger and better than the next guy. I don't think we want that.

There's a big difference between electric-assist and electric-powered. If the bike is designed so that the motor amplifies the pedaling forces, but won't propel the bike forward without pedaling, then enforcing a trail speed limit should be adequate. If the bike is designed so that it can propel itself on the road without any human exertion, then is is a "motor-driven cycle" which is already outlawed on most trails.

I don't see any issues with e-assist vehicles on a bike path. Mountain bikers regularly share trails with ATVs motorcycles and manage just fine. But I think it'd be wise to put speed limits in place for all vehicles on trail system—'e' or otherwise.

Teri, my 53 year old neice and I, 56 years old, are going to peddle a Rhoades 2 seater bike across northern America. We will have a small motor to use in case we r being chased or need a little push. We plan on biking 100% of the way. It is more of a security issue than anything else.