What does the USBRS mean to you? 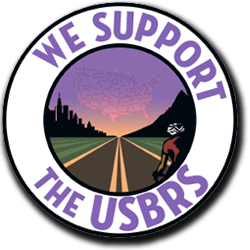 Last week we asked a simple question on Facebook: What does the U.S. Bicycle Route System (USBRS) mean to you? Cyclists responded with an outpouring of comments that truly show the need and desire for a national network of bicycle routes.

"The USBRS is a way to reconnect with others and ourselves, it is an evolution of freedom." -Ryan Conaughty

"It's an incredible way to discover our vast and diverse country and its people."  -Michael Cohen

"It means I can choose where I go and how I get there." -Pat Davison

"Great project! The more reminders of cyclists out there, and bicycle route signs, the more tolerant drivers will become. Finally, my personal deam for a ride across America. Go team!" -Allen Katz

"It creates peace of mind when planning short-range cycling adventures to nearby destinations which might otherwise be too intimidating to consider." -Doug Cheney.

"It means a visible show of support for cycling, both locally and long distance. The signs in particular go a long way (no pun intended) towards encouraging those of us out there already, as well as people unaware that there are wonderful routes all over the country!" -Jeff Sheinkopf

"It means that my fiancé and I can ride our bikes across the U.S. this summer for our honeymoon, self-contained." -Heidi M. Williams

"Having a great way to visit my brother in St. Louis via 66 from Chicago." -Tom Zurek

"Cycling is becoming more mainstream. This means that there is a clear way across the country that cyclists can use for their trip. I think it's great." -Jim Giddens

What does the U.S. Bicycle Route System mean to you?