We Hear the Train A Comin': A Bike-Train Tour on U.S. Bicycle Route 50 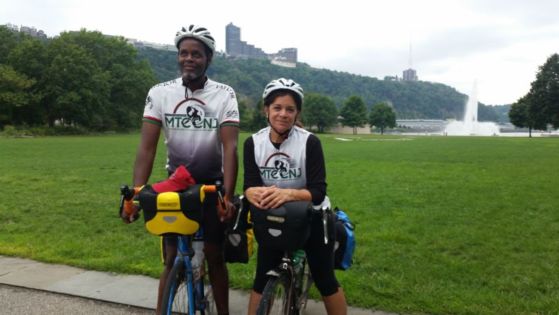 Adventure Cycling members Sharon and Randy met in 2006 at the local YMCA in Montclair, NJ where their love of fitness and adventure evolved to include cycling. They started out on Sharon's town bike and Randy's Rockhopper and over the next decade upgraded to road bikes, mountain bikes, and touring bikes a few years ago. They see many more bike tours in their future.

All it takes is the sound of a train whistle to take me back to a bike tour I recently took with my cycling significant other Randy along the rustically charming Chesapeake & Ohio Canal (C&O Canal) and Great Allegheny Passage (GAP). The ever-present sound of train whistles provided a sense of adventure and romance throughout our tour, and especially so on bikes.

These off-road trails connect 335 miles from Washington, DC to Pittsburgh. About 200 miles of that has been designated as U.S. Bicycle Route 50 in DC and Maryland with Pennsylvania joining soon.

We drove to our starting point at Harpers Ferry, with permission left the car at the KOA campground, and rode to the C&O Canal National Historical Park. Somehow, we missed the note about the spiral staircase off the bridge, so we carried the loaded bikes down one at a time. Once grounded, we noticed the beautiful bridgework, a taste of what was to come—truly a great start.

A late start combined with stops for photos, lunch in Williamsport, assisting a cyclist with multiple flat tires, and taking time for exploration, had us finishing in the dark! But we were prepared with bright lights and the darkness made it more of an adventure.

Note: Look for the Western Maryland Rail Trail from Fort Frederick. It's a paved option that might be better when riding from dusk to dark.

The Potomac River (left) and Paw Paw Tunnel are two highlights of the C&O Canal Towpath.

We started off on the Western Maryland Rail Trail and the pavement made it easy for Randy to sip his coffee while riding. It was also a much smoother ride for thirteen or so miles after the roughness of the C&O Canal Towpath the previous night. Walking through the long, dark Paw Paw Tunnel—the largest structure along the canal—was an adventure! Continuing on we were accompanied more and more by the ever-present train sounds enticing us to stop often to try and spot the trains. The day ended with a grand view of Cumberland across the river. 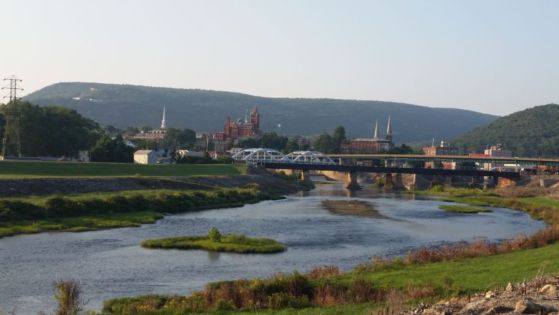 Cumberland is a small, bike-friendly town where the C&O Canal ends and the Great Allegheny Passage starts. We were warned numerous times, "It’s a climb out of Cumberland.” But hey, they were talking to two north Jersey cyclists who ride hills all the time.

Twenty-four miles at an average two percent grade proved a grind and we were happy to take a break in the shade at the ten-mile mark. The crushed limestone was smooth and easy to ride, a nice change after the rougher single-track of the C&O Canal, and it gave us more opportunity to observe our surroundings.

Note: Beware of landing in towns late in the day. Confluence was nearly closed up for the night but we were able to get dinner at the one open restaurant. 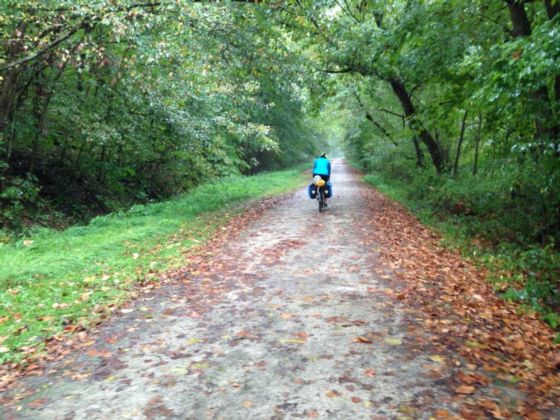 Riding the Great Allegheny Passage in the rain.

That morning, thoughts about food prompted a stop for breakfast in Ohiopyle, and we left there with enormous hoagies strapped like torpedoes onto our panniers to carry us through the day. It was a gentle downgrade with nice views and occasional sightings of trains in the distance. We were soaked by a brief downpour which made the hoagies and beer taste even better when we arrived in West Newton. At breakfast the next morning, we shared stories with other bike travelers, all heading to DC. One couple was on their first tour, another couple had world-wide tours under their wheels, and we roadies were on our third (Randy’s 5th) tour. 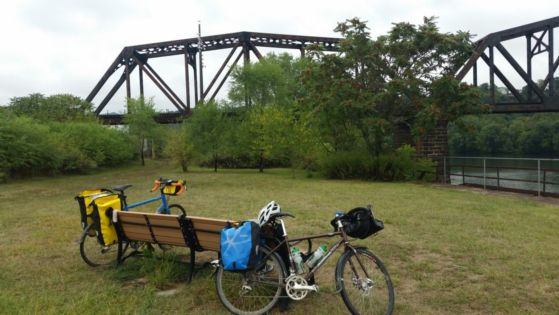 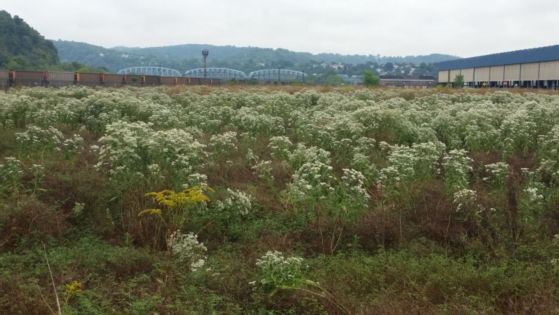 Industry and nature juxtaposed on the GAP outside of Pittsburgh.

The rain was coming down hard the morning of our fifth day, but Pittsburgh was waiting, so off we went. We set a leisurely pace since it was our last day on the trail and we wanted it to last. After an hour or so of rain, the clouds cleared and the landscape started to become more industrial and the trains more frequent. The steel bridges and steel landscapes against nature were stunning. Our last lunch, devouring the second half of those enormous hoagies, was at the historic Pump House in Homestead near where the Three Rivers Heritage Trail combines with the GAP. It’s an odd mix of old industry, new big box stores, and rivers that bring the trail over the Hot Metal Bridge, eventually into Pittsburgh’s Point State Park. 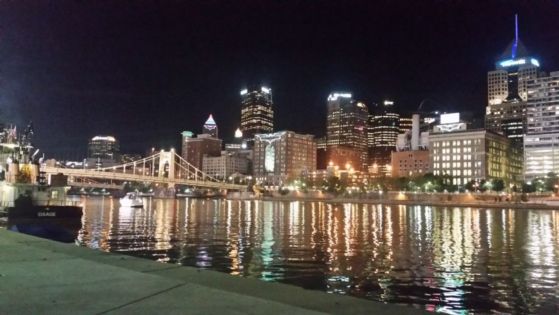 Pittsburgh (above) was bike friendly and people friendly with good food, sports, museums, and lots of bridges. We could have used another day there—one and a half days was not quite enough. 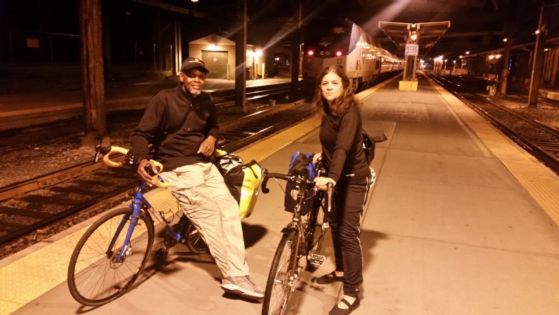 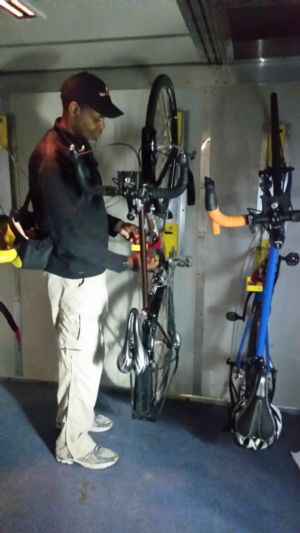 To return home, we had the opportunity to "test drive" the roll-on bike service that was about to be launched by Amtrak on the Capitol Limited the following Monday, September 12th.  We found that the roll-on bike service made the usually cumbersome train-bike travel and logistics effortless, simple, and efficient. We were well supported by the folks at the Amtrak station and also heard that the service was a real advantage to the train crew.

Now that we're back home, and suffering from post-tour syndrome, it's time to start planning the next one!

Recommended reading - TrailBook: The Official Guide to the C&O Canal and The Great Allegheny Passage.

Story and photos by Sharon Gill and Randy Jackson.

West Newton....Campground east of town has shelters, toilets and city water. Right on river with trains 24 hours on other side.

Thank you for your post. I'd like to do a similar trip, including Amtrack back from Pittsburgh. Where did you stay in West Newton? Google Maps isn't showing me any lodging.

Sitting here in the cozy comfort of our living room in Auburn Washington. Reading this article was like taking a back east off road tour with out having to leave home. Thanks for the beautiful pictures and editorial expression. I felt like I was with you. BriJac.