We get a lot of questions about signing a U.S. Bike Route — is it required? Who pays for it? How often do signs need to be placed? What do signs look like? How are they integrated into local wayfinding signage?

So, down to the biggest question — who pays? A number of states, including Virginia, Michigan, Missouri and Kentucky, have already successfully signed designated U.S. Bicycle Routes, and each used different strategies to obtain the necessary funds. In this post, Adventure Cycling volunteer and Michigan resident Kerry Irons explains how Michigan has approached the process of getting funding for USBR 20 signage and some of the challenges encountered. 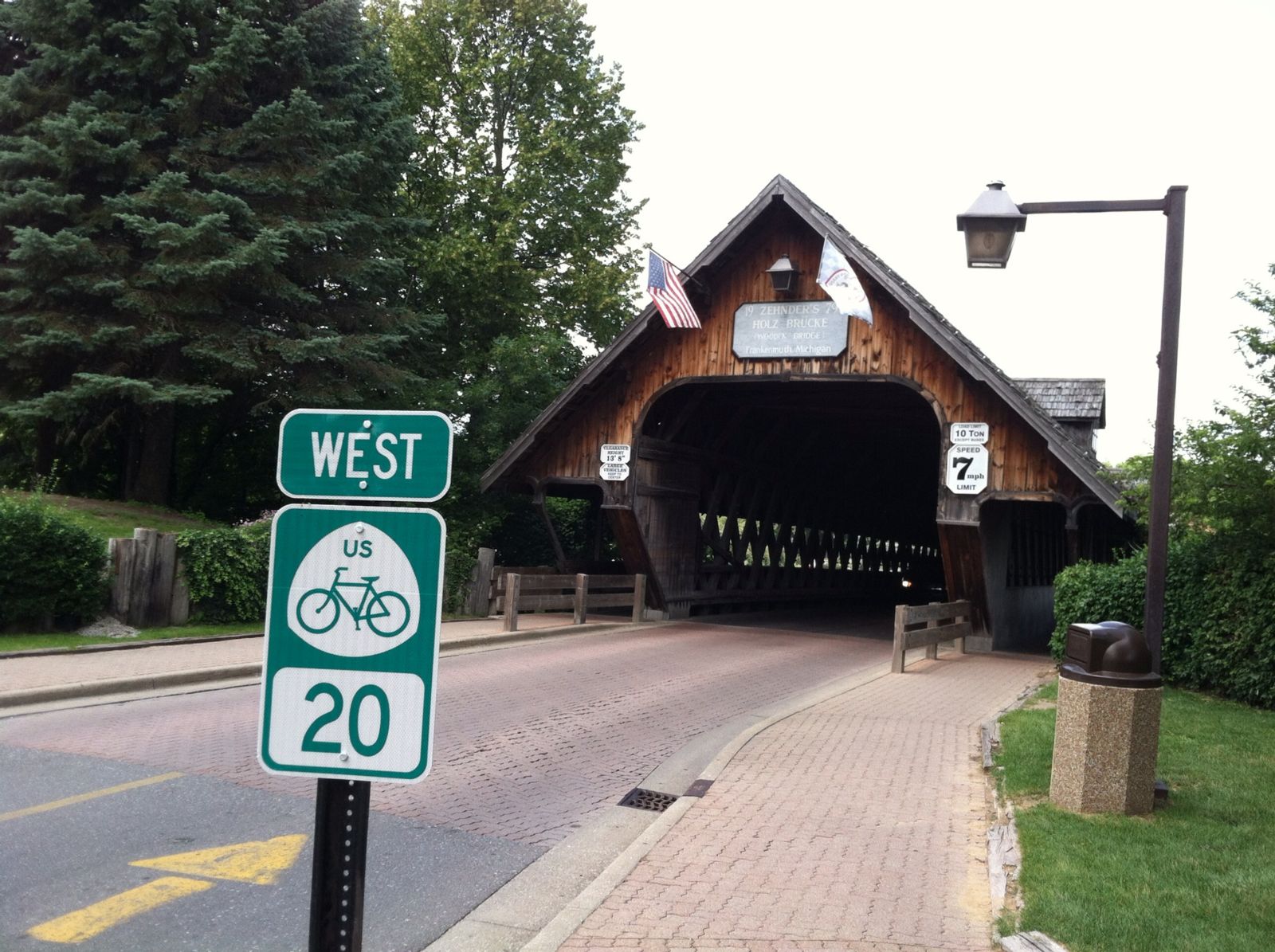 The DALMAC Match — A Perfect Fit

The Michigan segment of U.S. Bicycle Route 20 was approved by AASHTO in May of 2011. After the initial celebration and press had died down, we were left with the question, "Now what?" We knew we wanted to sign the route to provide better wayfinding for cyclists and help boost tourism, but the big question mark revolved around funding.

Adventure Cycling and Michigan Trails and Greenways Alliance (MTGA) in partnership with the Michigan Department of Transportation (MDOT) had already obtained agreement from the 25 road jurisdictions along USBR 20 to allow signage, although the agreement did not include any commitment to pay for or install the signs. The state agreed to pay for signage on state-owned roads, which accounted for about 20% of the route, but we needed funding for signing the rest of the route. Enter the Dick Allen Lansing to MACinaw bicycle ride (DALMAC).

DALMAC is Michigan's annual four or five day ride from the state capitol in Lansing to the northern tip of the Lower Peninsula — the Straits of Mackinac. DALMAC is run by the Tri County Bicycle Association, and half of the profit from the ride is set aside as the DALMAC Fund to improve bicycling in Michigan.

The project to sign USBR 20 was an excellent fit with the DALMAC Fund’s grant goals, so Scott Anderson, the MTGA volunteer who led the effort to designated USBR 20, initiated the request for the DALMAC Fund grant. With strong support from MTGA Executive Director Nancy Krupiarz and help from Adventure Cycling, Scott put together a document that explained the need (details of number of signs and cost) and the positive impact that signing this route would have on bicycle travel in Michigan. As the national technical resource for the U.S. Bicycle Route System, Adventure Cycling submitted the grant application once it was completed.

Our quest for funding was successful — DALMAC Fund supported the project with a $10,000 matching grant for the purchase and installation of signs along the route. The challenge of a matching grant is raising the match, so we approached this by allocating the $10,000 towards purchasing the signs and having the local agencies (cities, counties, parks departments, etc.) match with in-kind contributions to install the signs.

We are now using the grant money to purchase the USBR 20 signs, along with funds raised from a number of local groups — the Tri City Cyclists, Friends of the Pere Marquette Rail Trail, Midland Area Community Foundation, and the Frankenmuth Bavarian Inn. We will then give those signs to the local agencies that commit to installing and maintaining them, who will contribute to the match with in-kind labor and materials. Five of the 25 jurisdictions along the route have already installed USBR 20 signs and we anticipate many more going up this year.

This effort involves over two dozen local agencies and individuals and demonstrates how the willingness of the DALMAC Fund to support signing USBR 20 can make a big difference for this 310-mile route across Michigan.