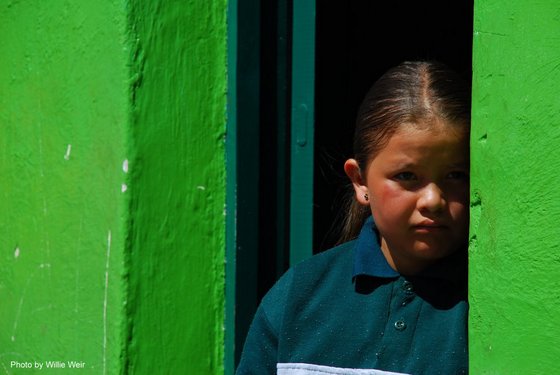 Photographing people can be a challenge on a bike trip. Sure, you can get all kinds of shots of groups of people smiling directly into the camera lens. But sometimes it feels like that's all you can get.

The loaded bicycle attracts a lot of attention. That's a good thing, most of the time. But it's hard to capture natural photos when you are always the center of attention.

That's why I love it when something else is going on to draw the attention away from me--a busy market, a sporting event, a wedding, a concert. Or, in the case of the photo above ... a parade. We had stopped in the town of Chachopa, Venezuela to take a break. We were pedaling up to the highest pass in the country (over 13,000 ft).

The bright light of the green wall of a corner store is contrasted in the somber look of the little girl. Why such a sad face while watching a parade? I turned around to see the street filled with students in a marching band.

This little girl didn't want to watch the parade. She wanted to be in the parade.