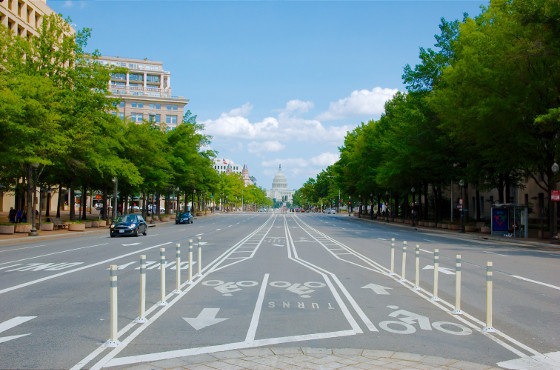 We are delighted that Zach O'Conner, AASHTO's Communications and Publications Coordinator, has written his second guest post for the Building the U.S. Bicycle Route System blog. He shares how his coworker's multi-modal bicycle commute from the suburbs to the heart of Washington DC makes use of the newly improved DC bicycle facilities. A big thank you to Zach and please enjoy!

We commute to work our own way, whether it's by bike, car, walking, or mass transit. My commute is boring compared to my fellow co-workers at AASHTO; I walk to my nearest Metro station, transfer downtown, and walk to the office. I pass by two Capital Bikeshare (DC's awesome bike share system) stations on my way to work. I could use this method however I tend to be a bit of a transit nerd and enjoy taking Metro. For AASHTO Communications Director Lloyd Brown, his commute is far more adventurous.

Lloyd commutes to work from his home in Bethesda, a Maryland suburb outside of Washington DC. At least twice a week Lloyd will commute from his home by bike to AASHTO's headquarters in DC. The District has been recently known for investing in bicycle infrastructure, but how do the suburbs score? It all depends where you live. He'll leave his home and take Old Georgetown Road to either the Metro or Capital Crescent Bike Trail into DC. This is the point where Lloyd feels he's taking his life into his own hands for 3.5 miles. The 4-lane highway is full of potholes and traffic, and can be risky for a cyclist during any time of the day.

Once he reaches downtown Bethesda, Lloyd is able to hop on the Capital Crescent Trail, a rail-to-trail project that is a backbone for nearby residents and bicycle commuters. The trail, which serves more than a million bikers and walkers a year, ends in Georgetown, where Lloyd can utilize the city's bike lanes for the rest of his commute. DC's bike lane network is extensive; however Lloyd noticed some problems with both cyclists and motorists. On occasion he'll notice both drivers and bicyclists ignoring signals, while cars ignore bikes on the road. "Cars don't make it easy for bikes, but bikes don't make it any easier for cars." The DC government banned U-turns on Pennsylvania Avenue, where there is a two-way dedicated bike lane in the middle of the street. There have been blog articles, videos, and photos posted of cars breaking the law, and thankfully their actions come with consequences, a hefty fine. However, there is equal blame to go around. On the bike trail into DC, Lloyd sometimes wishes cyclists would show one another some common courtesy, such as alerting when a bike is turning or passing another.

This isn't a car vs. bike scenario, but more of a commuter vs. commuter. The point is to be courteous, no matter which mode of transportation you utilize. That way we can all reach our destination, the weekend, safely.

ZACH O'CONNER is the Communications and Publications Coordinator for AASHTO. He is a self-proclaimed transit nerd and is a graduate of American University in Washington DC. For more information on AASHTO, visit transportation.org or tweet us @aashtospeaks.