This week the staff at Adventure Cyclist sent our final issue of the year off to print. You'll see it in your mailbox around Thanksgiving, but for us it's on to 2018 and the start of Volume 45! We've got big things planned for next year as we celebrate 20 years of the Great Divide Mountain Bike Route, continue to expand our technical coverage via the Cyclists' Travel Guide (moving to the March issue in 2018), and have some exciting features in the works ranging from a look into bikepacking's beginnings to an examination of just how green — or not — your bike is. But before we totally leave Volume 44 behind, I wanted to share a few of my favorites from the year. Of course editors, like parents, love all their stories equally ... but here's my own personal "Best of": 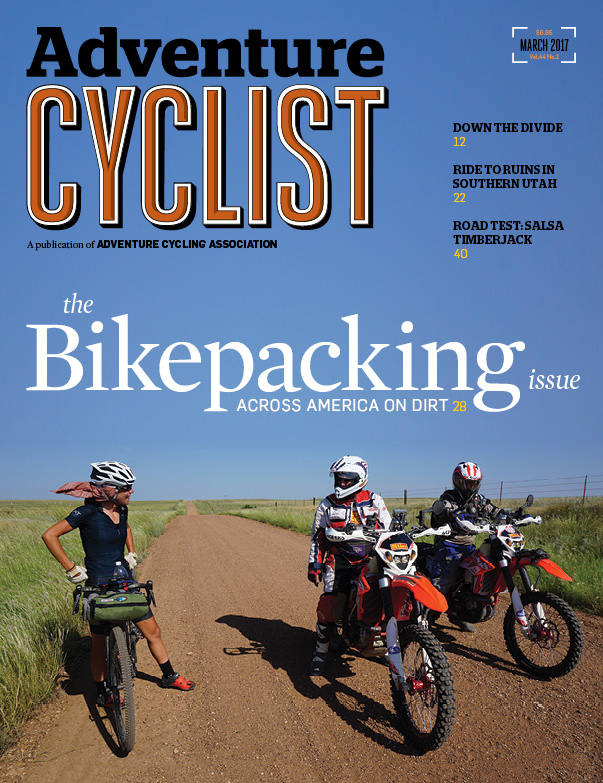 Hands down, nothing else comes close (and I really liked a few covers this year), the image of Sarah Swallow and a motorcycle rider chatting along the Trans America Trail is my favorite. There's such a wonderful story in this single image — Sarah, looking Lawrence of Arabia-esque in the wind, holding her own next to a pair of much larger, armored up moto riders. I simultaneously see a strong young woman (traveling under her own power) every bit holding her own next to another traveler, and two very different trail users captured in a moment of shared adventure — they are smiling, after all. To me it's everything a cover should be: a story in itself and an invitation to open the issue and find out more. 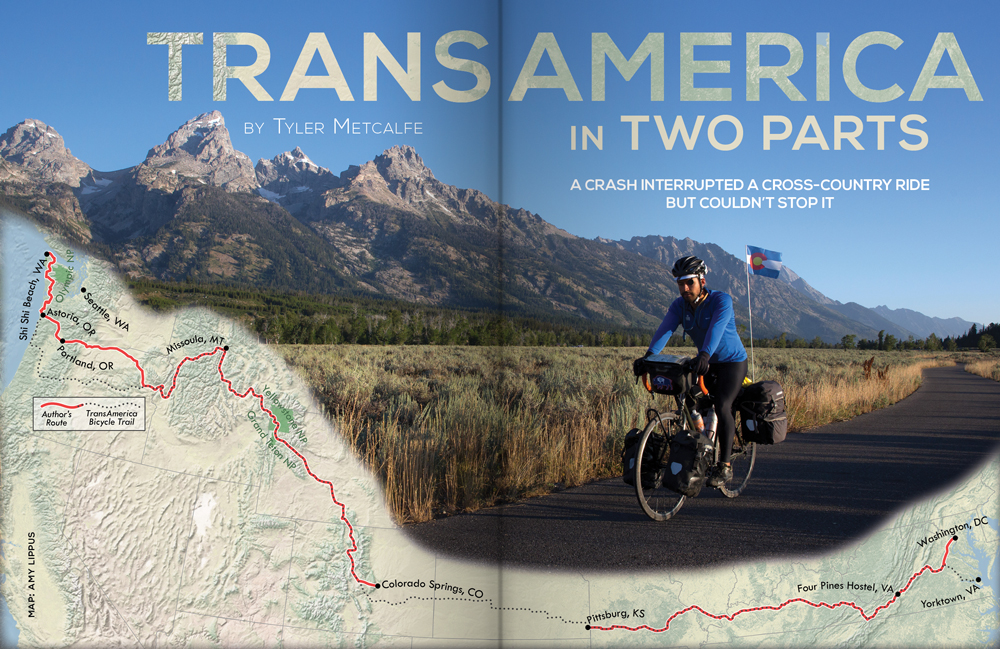 Of course I loved the brilliantly told tale of riding across Southern Spain (cough, me, cough), but it was Tyler Metcalfe's story of crossing the TransAm and being hit by a car halfway through that was my favorite of the volume. I'd talked to Tyler for months in 2016 after he pitched the story of his National Geographic staffer-to-bike-traveler story and was excited to welcome him to Missoula for our 40th anniversary celebration. That is, until he was hit by a driver in Kansas and his trip was put on hold while he recovered, unsure of whether he'd be able to resume. He did get back on the bike and made it to Oregon, hitting the road again earlier this year to ride the Pacific Coast Route, which he beautifully documented for our readers online. The story of his accident also resonated with readers, plenty of whom wrote in to express sympathy, empathy, admiration, and outrage. 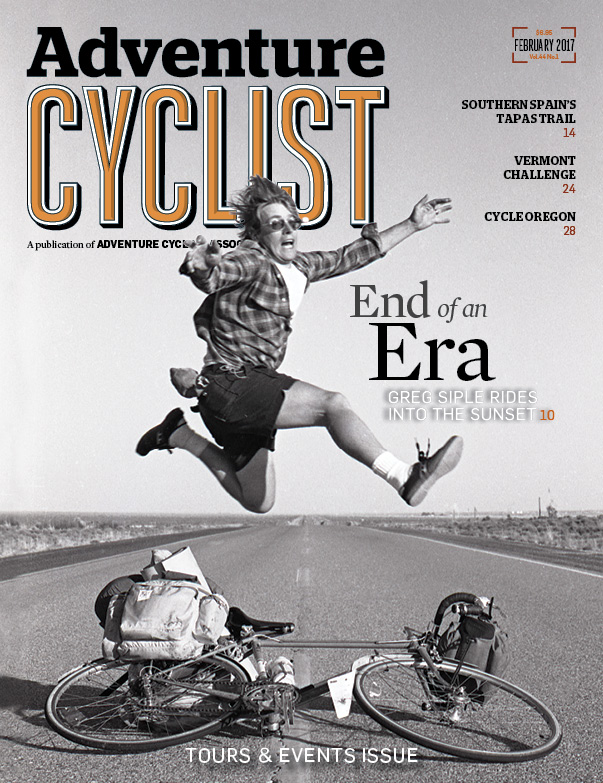 Yeah, I'm a little biased, but the shot of a young Greg Siple leaping over his bike on a lonely Southwest road is just ... so very Greg. It made for a memorable cover, but it's just a fantastic photo that captures the man and the moment as he officially retired from Adventure Cycling after a life's work helping build the organization into what it is today. It wasn't the first time it appeared on a cover, either. BikeReport ran the image as a cover shot back in the 80s, but we thought it was a worthy repeat. 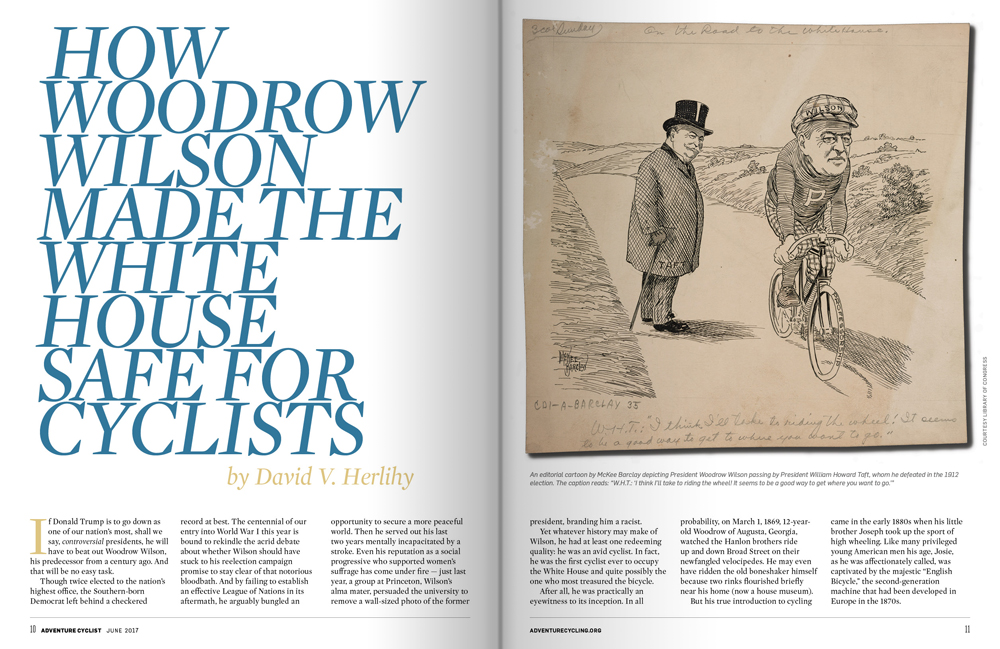 Best Layout: How Woodrow Wilson Made the White House Safe for Cyclists, June 2017

Proof that you don't have to have a spectacular photo to make a story look great, David Herlihy's piece on the 28th President was reliant on just the right typeface to make it work. Especially since right up until the deadline we weren't sure if we'd have a high-res version of the editorial cartoon that ran on the opening spread from the Library of Congress. The resulting combo was an elegant, impactful opener that set the tone for David's in-depth reporting on a fascinating moment in bicycling history. 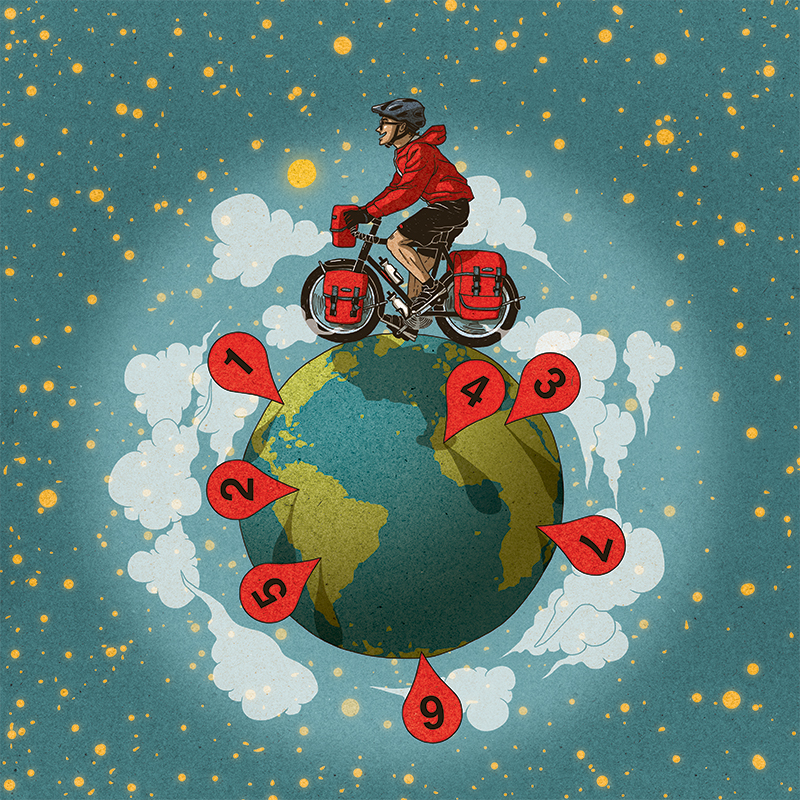 I can't remember how we stumbled onto Dongyun Lee's portfolio, but I'm awfully glad we did. The illustration of the traveling cyclist on top of a globe for a Travels With Willie column in the July issue was my favorite of the year (edging the exceedingly well-done, and just a little creepy, drawing of Tech Editor Nick Legan as a sommelier in the August/September issue).