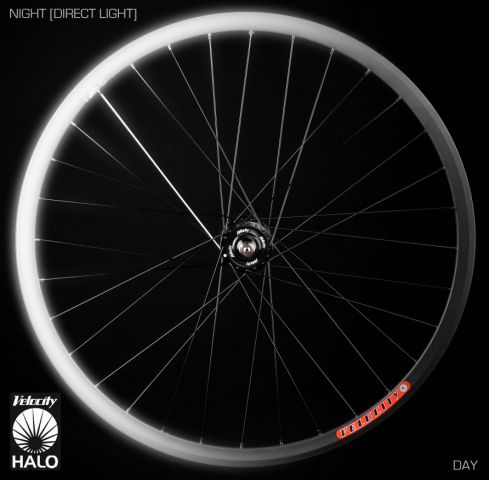 Velocity DYAD rims are hard to beat for touring. They sit a little wider than most rims at 24mm, which helps prevent pinch flats when running wider tires, such as a 700x32 touring tire, and offers a sturdy and comfortable ride. The rims lack spoke eyelets, which on the surface can appear as a weak point, but the V-profile adds more than enough strength near spoke nipples to eliminate the need of eyelets. In fact, if you were to cut a cross-section of the rim, you would see a reassuring amount of material near the spoke holes.

If you have any plans to build up a new touring wheelset in the near future, Velocity has recently teamed up with Halo Coatings to produce a unique reflective powder coated surface that they are applying to a few of their products, and the 36-hole DYAD touring/commuting rim made the cut. The reflective properties are built into the actual paint by incorporating microscopic glass beads into the coating that is applied, which won't wash out, will be reflective in all conditions, and is smooth to the touch.

These are certainly not a substitute for front and rear lights, and won't make you more visible to traffic from the front or back, but they will make you more visible from the side as you pass through intersections, where spoke reflectors are often obscured by panniers. For the DYAD rim, they are only available in 32 and 36 spoke counts with either machined or non-machined break surfaces, so you could also lace these up to a mountain bike hub for a 29er.