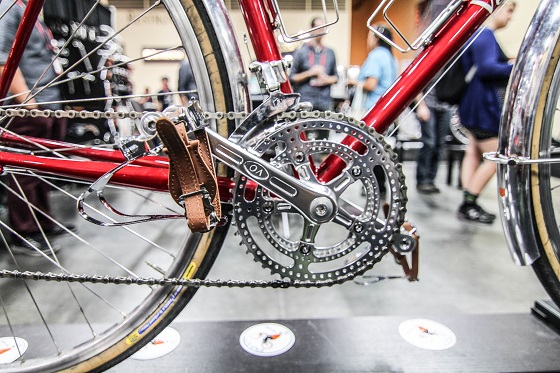 It's hard not to be attracted to shiny things, which is one of many reasons I've been spending a lot of time this week checking out the Velo Orange Grand Cru Drillium 110 Fluted Double Crankset. That's a pretty impressive name for a component, rivaled only by the book titled "Cycling the Great Divide: From Canada to Mexico on North America's Premier Long-Distance Mountain Bike Route." Before getting into the details, I thought it would be fun to break down the name of the crankset first.

Velo Orange (VO): Based out of Annapolis, Maryland, this company focuses on building bikes and components that are both comfortable and durable for century rides, randonneuring, or bike overnight tours.

Drillium: This refers to the process of milling and drilling metal bike components. It was big in the 70's among racers trying to shave some grams off their bike parts.

Cru: Since these cranks are awesome, I can only assume that Cru is referring to somebody awesome. Clearly that would be Cru Jones.

110: This is your bolt circle diameter in millimeters. This is standard for touring and cyclocross cranksets, and will be good to know if you need to buy new chainrings.

Fluted: The definition of fluted is shallow grooves running vertically along a surface. On the crank arms and spider, you can find such grooves that produce a nice appearance.

You have a few options available with crank arm length, which are 165mm, 170mm, or 175mm. Which size you choose depends a lot on the intended use, and your pedaling style. The size of your current crankset should be stamped on one of the crank arms, and you can always use that as a reference point.

The classic appearance comes with some classic tech. You'll want to match this up to a 118mm square taper bottom bracket. The crankset retails for $200, and be purchased either direct from Velo Orange's website, or through one of their authorized dealers.

Um, why is Adventure Cycling, supposedly dedicated to cycletouring, suddenly enamored with a super-stylish double? Style is way down the list of touring componant requirements, and the cycletourists I know all swear by a triple. Hills, you know.

Grand cru (French for great growth) designates wines of great quality and in this case an outstanding crankset.

"Cru" is French for "vintage" or "growth." For example, Grand Cru in wine parlance, kind of near and dear to the folks at VO, connotes great potential.