The following is a guest post by Missouri Bicycle and Pedestrian Federation Executive Director, Brent Hugh. 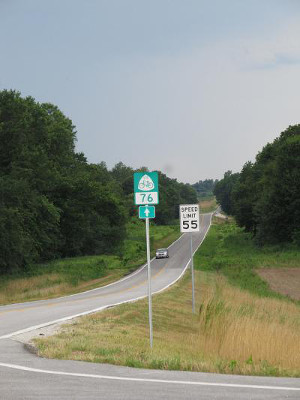 New signs have gone up marking the U.S. Bicycle Route 76 (USBR 76) through Missouri. The route is over 300 miles long and passes through the southern third of of the state. USBRS 76 through Missouri follows the TransAmerica Bicycle Trail, a national bicycle route created by Adventure Cycling Association.

For more than a decade, the Missouri Bicycle and Pedestrian Federation (MoBikeFed) and Adventure Cycling have worked with MoDOT to update the route and permanently identify and mark it with signs. The project was listed as one of the High Priority Statewide Bike/Ped, and ADA Projects for Missouri in 2010 and ranked 10th highest out of nearly 300 projects on the list.

Earlier this year, MoDOT Nonmotorized Transportation Engineer, Ron Effland received word that his request to fund installation of the signs was approved. He completed the application to officially include the segment in the U.S. Bicycle Route System, and that application was approved in May 2013. Now the signs have gone up across the state.

Effland, who lives in Springfield, which is just south of the USBR76/TransAmerica Trail route, has been talking with some of the approximately 1000 cross-country cyclists who use the route every year:

"I have talked with several cyclists to ask how the signs looked and if they were helping. Most have said they don't need a map in Missouri any longer because the signs are at each turn now. That was not the case before the signs. A good map was required to stay on route before the signs went up. I talked with a couple of guys from Canada in Ash Grove one day. They said they really appreciated the USBR signs in Missouri because they were able to put down their maps for a while and just ride."

The reputation of the Missouri section of the TransAmerica Trail has historically not been good among cyclists. That is one reason MoBikeFed, cyclists, organizations, and municipalities along the route have been pushing MoDOT to improve, sign, and officially recognize the route. Official recognition and signs help cyclists stay on the route and help prevent cyclist harassment.

The official recognition and designation also opens the way to higher priority for future improvements on these routes, such as adding shoulders. This is especially important at a time when Missouri officials are planning how to spend a proposed $8 billion in transportation funding over the next 10 years.

In the near future, MoDOT is looking to officially designate and sign at least one more of the six cross-country bicycle routes that run through Missouri. The most promising candidate is likely the Missouri stretch of Route 66 that is currently included in the development of Adventure Cycling's next cross-country mapped route, Bicycle Route 66. The stretch through Missouri is beautiful and would garner immediate attention in the world of Route 66 aficionados. Other possibilities are Adventure Cycling's Great Rivers South Route and Lewis and Clark Bicycle Trail, or the Mississippi River Trail.

Maps and information about state-wide bicycle routes and on-road bicycle trails through Missouri are available through the Missouri Bicycle and Pedestrian Federation. Huge thanks goes to MoDOT for making these projects possible!

Promoting and improving the six national bicycle routes that run through Missouri, and other bicycle routes across the state, is an important part of MoBikeFed's Vision for bicycling and walking in Missouri. Projects like the 22 projects moving forward from the Missouri High Priority List, representing over $15 million in investment in biking and walking facilities, are the end result of decades of work, lobbying in Jefferson City, building relationships with decision makers, and applying pressure to government agencies. Membership and support for MoBikeFed makes it happen!

Great to hear about this - I will be passing through Missouri following Route 66 for charity and look forward to seeing the state. Fantastic that cyclists are being thought of at state level -Brilliant!