Up Close and Intense 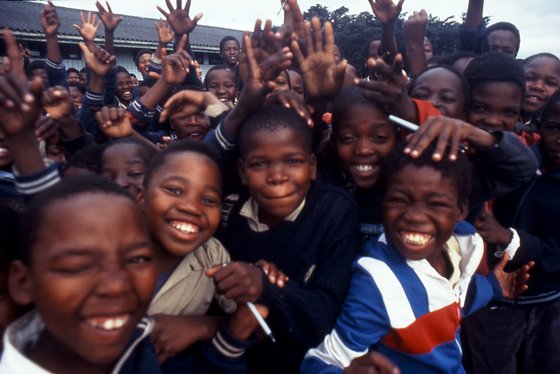 If I had to choose one photo I've taken that captures the view of the world you get when you travel by bicycle, this is it.

Up close and intense.

It's 1995. Nelson Mandela has been president for less than a year. I'm on a five-month bike trip in South Africa, where I'm told by dozens, no, hundreds of people that if I travel in the former homelands that I'm a dead man. Period.

I come across a school. Someone notices the bike traveler and a mob of students comes charging down the hill.

My first reaction is to flee. But instead of taunts and shouts of anger, I hear laughter.

The kids surround my bicycle and I take out my camera and snap a few shots.

I look back at this photo and wonder about the lives of these students, now adults in their twenties. I look at the smiles. The intensity and zeal. I hope that life has treated them well.

None of them knows the gift they gave to this traveler that day. The anxiety that had been welling up in me for weeks melted away in an instant. I continued my journey with their smiles etched in my memory ... a potent remedy to prejudice and fear.

Hi Michael; Thanks for you comment. How long it takes really depends on your daily mileage and the kind of experience you're looking for. I'd suggest posting your question in our online forums to get perspectives from a variety of experienced touring cyclists. Here's the link: http://www.adventurecycling.org/forums/index.php. Good luck!

Great post and wonderful picture. I've been thinking of doing a cross country trip to raise funds and awareness for my sisters African NGO. Question: is it possible (in theory at least...I realize there are inummerable variables) to cross the US in 30-45 days (Transamerica route to Pueblo and then Western Express)?