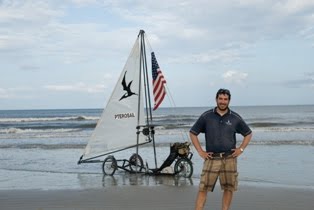 We get tons of emails at Adventure Cycling about riders' various adventures around the world — upcoming, in-progress, and "it's a wrap" alike. Below I'll share four examples of what I'm talking about, all of them involving one of our mapped cross-country routes.

Last week John Fischer of Brunswick, Maine, wrote to say this: "Hello. I'm not sure whether you're aware of this, [but] this is my third Northern Tier ride with Adventure Cycling Association to raise money for the American Lung Association. It is also my fourth transcontinental ride with Adventure Cycling that I have used as a fundraising vehicle. In total, I've done six Adventure Cycling rides to raise money for the ALA." John's group is slated to finish in his home state on September 7. (Thanks for all you're doing, John!)

Also relating to the Northern Tier, and to the TransAmerica Bicycle Trail, earlier this summer we heard from Joelle Buffa, who passed along this great story: "In 1990, [Clyde and I] rode our bikes on the Northern Tier Route for our honeymoon. In lieu of wedding gifts, we offered that our friends and family could choose to 'sponsor' us for a certain amount of dollars or cents amount per mile. We ended up raising over $3,000, which we donated to Conservation International for the purchase of land adjacent to a Biosphere Reserve in Guatemala. Now, to celebrate our 20th anniversary, we are riding the TransAm route from Neskowin, Oregon, to our home in Greenbackville, Virginia." A look at the couple’s photo-abundant website reveals that they are getting very close to the end of their journey.

Now, down to the bottom of the country and the Southern Tier. There we had Stephane and Sheri Marchiori, who incorporated that popular route into their around-the-world tour that lasted five years. The Southern Tier was the final leg of their trip, and one of their favorites. You can read why in an interview with the couple at Travelling Two: Bike Touring Inspiration.

Finally, for something a littlle different — no, a lot different — this note from John MacTaggart of North Liberty, Iowa, which we received last June: "Howdy folks. Next month we'll be doing something that has never been done before: sailing and cycling across the country! The street-legal Pterosail combines sailing, cycling, and solar and regenerative technologies into one." John did indeed sail and cycle the Southern Tier, finishing up in St. Augustine, Florida, on August 12.

That's a tough one to beat, so I'll sign off for the time being.