Meet Steve Buchtel, an Illinois native and a passionate advocate for trails in Illinois. As the Executive Director of Trails for Illinois, he brings a dynamic mix of dedication, enthusiasm, and sense of humor to developing, researching and promoting trails in his home state. Trails for Illinois was an instrumental partner in the recent designation of U.S. Bicycle Route 36 and 37 along Lake Michigan, and designated the route in record time - only four months! In this post, Steve tells us in his own words (and songs!) about bringing trails to people and people to trails.

What does Trails for Illinois do and what is the organization’s vision?

We help communities and agencies build and connect to trails. We show them how trails can be used for economic development, environmental stewardship, and improving people's health and wellbeing - the Triple Bottom Line. We want everyone to have safe, convenient access to non-motorized trails. In other words, we want your home to be your trailhead.

How did you become involved in Trails for Illinois? What motivates you and makes you passionate about trails?

I worked for the Chicagoland Bicycle Federation and then the Active Transportation Alliance for 17 years, doing a lot of bike advocacy and community bike planning. I began working on some trail projects during my last few years there, and fell in love with how people relate to trails, and experience them. Trails have been with us from beginning, and tickle something elemental that is essential to our well-being.

Bike lanes are cool, but they didn't reach people, including me, the same way trails do. So I started looking for a way to make building trails my job. I talked a tiny little organization with no staff and no program into letting me be Executive Director until the money runs out. It's been 2 1/2 years, and I think we're making a difference in Illinois. 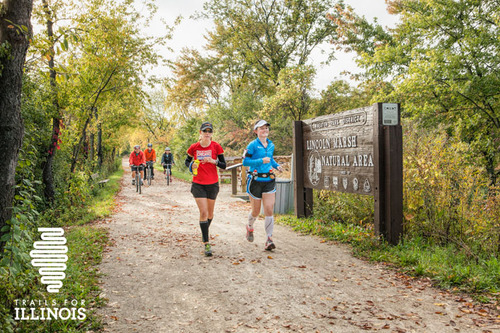 The Illinois Prairie Path is a popular recreational trail.

Tell us about your great idea for building trails in Illinois.

Like a lot of states, Illinois has become dependent on our struggling state and local agencies to build and maintain trails using federal and state grants, which are shrinking as they become more competitive. We're at the point where trail closures last for years because no one can afford to fix them, and building even an easy 3-4 mile new connector trail can take a decade. I'm tired of this, and so are a lot of other people.

I'm going to bring civilian conservation crews like Americorps and Student Conservation Association into Illinois to jump start a self-sufficient way for communities and organizations to build and repair trails. I call it Illinois Trail Corps. We can train volunteers alongside corps teams to become trail stewards, help communities improve their trails, and build new connections with local resources. We're piloting the model at Lake Shelbyville this summer, which is about 3 1/2 hours south of Chicago, and repairing and extending their trail system with Americorps NCCC.

How can people help with this effort?

We're taking on a lot of the costs ourselves with this idea, mainly to buy trail building equipment and an equipment trailer that we can use for years around the state. There are exciting premiums for donors, including a special edition randonneur-style fast touring bike built by Chicago frame builder Legacy Frameworks. A local bike shop, Blue City Cycles, and SRAM are donating components. We've christened the bike the Phil T. Hodge after the crazy civil engineer who organized volunteers and a community college welding class to build a steel truss bridge over active rail lines for the Illinois Prairie Path. That kind of spirit I hope is what Illinois Trail Corps embodies.

Donations for shovels, Pulaskis, and other important tools can be made at: http://trailsforillinois.org/ILtrailcorps. 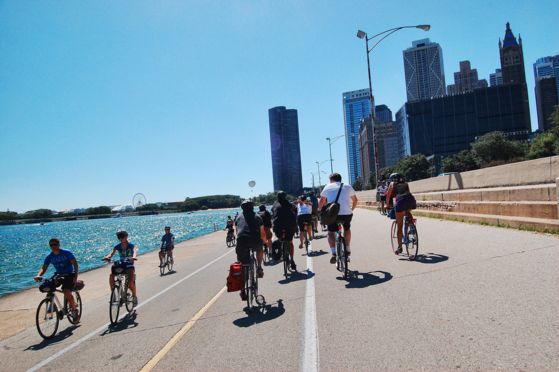 Cyclists on the USBR 37 Lakefront Trail in Chicago.

How did you help with the effort to designate USBR 36/37 in Illinois?

Talk about stars aligning! 1) The Illinois Dept of Transportation was wrapping up its first bike plan and was looking for a quick win; 2) the NE Illinois region has done amazing work connecting trail systems; 3) so many NE Illinois communities now have adopted bike plans, and 4) I'm an old man in this business, and know or am known by just about everyone. Essentially, I traced a route along trails near the Lake Michigan from Hammond, IN to Kenosha, WI, and helped IDOT get everyone along the route into a room to show them the map. Four months later, we've got US bike routes! Adventure Cycling staff Kerry Irons and Ginny Sullivan were amazing talking everyone through it, if a little shocked at how easy it was. I don't know if it's a repeatable model, but it sure was fun to get it done so fast!

What benefits do you see the USBRS bringing to Illinois?

Neither our state nor our communities have put much effort into attracting bike tourism. But the potential is there. I can't tell you how many people have told me that flat countryside is an enticing feature - not everyone longs for rolling countryside and epic mountain climbs. And we've got the backroads and adventure-sized trails to support it- the Hennepin Canal State Trail is almost 100 miles long! USBR 36/37 has attracted the attention of the Illinois Office of Tourism - they let us borrow their Mini Abe Lincoln doll to shoot photos to help promote it. It's going to raise the profile of bike touring and trail-based vacations in Illinois. 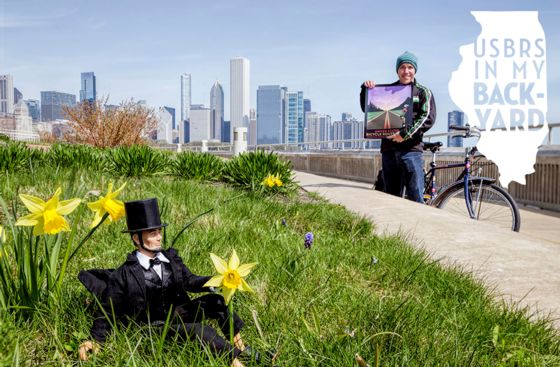 Steve and Mini Abe hang out on the Lakefront Trail in Chicago, recently designated as USBR 37.

Tell us about your work on Making Trails Count research.

I believe that trails' role in Illinois tourism, economic development, and quality of life is under appreciated because those benefits have largely not been measured. With our Making Trails Count program, we go out and measure different aspects of the Triple Bottom Line: economic impact, environmental impact, health impact. We use surveys that University of Illinois' Office of Recreation & Park Resources help us develop and analyze, and trail counts that we send to Rails-to-Trails Conservancy for their expert analysis. I know annual use, daily spending, most popular activities, even average time spent on the trail for 65 year olds compared to 35 year olds on seven of the state's largest trails so far. Your readers can download the reports at http://trailsforillinois.org/maketrailscount.

What is your favorite trail or bike ride?

Anywhere in Illinois that starts with an Amtrak ride. Trains are so much fun. We're really fortunate to have roll-on bike service on intrastate Amtrak trains, and good service from Chicago to some really neat places like the Shawnee National Forest (Tunnel Hill State Trail), the St. Louis metro area (Chain of Rocks bike bridge over the Mississippi River), the Quincy area (Mississippi River, beautiful trail system), and all these post card communities in between.

I think the Grand Illinois Trail has huge potential for fun. It's a 450 mile loop of trails and mostly quiet back roads in northern Illinois from Buckingham Fountain in Chicago to the Mississippi River Trail and back.

Tell us about your USBRS song!

I was dinking around with my guitar one morning when I was supposed to be beginning a drive up to Saugatuck, Michigan to talk about USBR 36 & 37 at the Great Lakes Trails conference, and a little string of notes I played sounded like it should be a chorus. So I spent the whole drive up writing this song in my head, and wrote it down when I got there. Playing it at the conference was the first time I had ever heard it out loud. It's about a guy in Hammond, Indiana, down on his luck, who decides to leave it all behind and head out on the U.S. Bike Route to find a new life. I only cover his journey on USBR 36 & 37, and in my imagination he winds up eventually back in Hammond but now sees it with explorer's eyes, and falls back in love with his home. But he doesn't have to come home for a long time, and honestly he could go anywhere. I want other USBR coordinators to write verses so we can see where this guy goes!

There is no way to determine where these trails are or whether they'd be useful without maps. Sadly, maps seem to be revenue generators, so they're not shown, limiting things for outsiders. Perfectly silly.