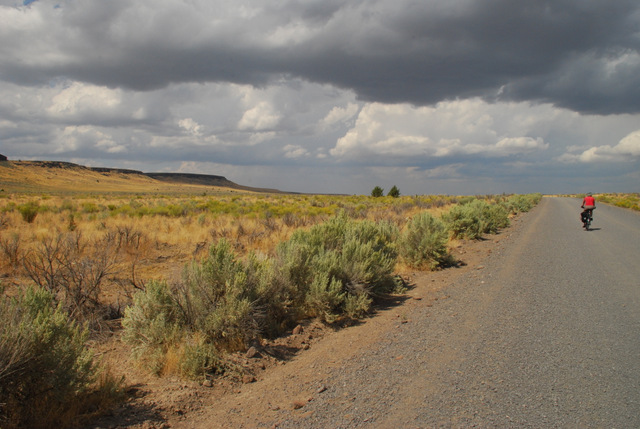 In southeast Oregon there is a fabulous day ride (Diamond Loop Tour). Although this loop is promoted as a driving tour, Kat and I encountered only a dozen vehicles as we pedaled through the high desert on mostly unpaved roads.

We encountered an historic round barn, amazing volcanic formations, and plenty of bird life. Landscape that appeared stark and barren at first glance, became a kaleidoscope of colors, as the sun played hide and seek with thunderclouds.

Late in the afternoon, Kat noticed something on the edge of the opposite side of the road and crossed over to investigate. What she found was tragic and beautiful at the same time. 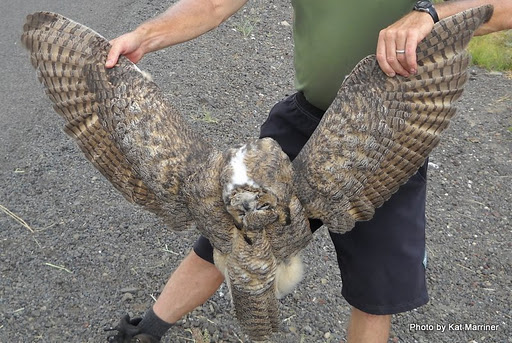 It was the body of a Great Horned Owl. This magnificent bird had apparently been hit by a vehicle during the night or early that morning. (In college, I volunteered at the UC Davis Raptor Center. Most of the injured owls convalescing at the center had been struck by vehicles.)

We marveled at the beauty and complexity of the bird's feathers. Although Great Horned Owls look enormous, adults weigh only two to four pounds.

We placed the body further off the edge of the road, and pedaled in silence for awhile.

It was yet another encounter made possible by the vehicles we were riding. We would have zoomed by in a car. And bikes are owl friendly! As far as I know, there has never been an owl fatality caused by a collision with a bicycle.

(A side note: If you have a rodent problem and live where owls (and/or other predators) hunt, please reconsider using poison. Studies have shown that 60 to 80 percent of Great Horned Owls tested had rodent poison in their system.)

We live only a few hours from that area, might have to ride that this year. Thanks for the post!