The North American Handbuilt Bicycle Show (NAHBS) has proven to be a showcase for bicycles and ideas that find their way into mass-market bikes, and into the mainstream. “Touring bicycles” have followed a hard line for decades, demanding 700c wheels, drop handlebars, and attachment points for fenders, racks, and water bottles. Recently, the traditional touring bike has been challenged by modern concepts born on the dirt tracks of the Great Divide Mountain Bike Route (GDMBR), above treeline on the Colorado Trail, and on the 1100-mile Alaskan Iditarod Trail. Riding off-pavement promises low traffic volumes, excellent camping, and extraordinary scenery. To access remote settings via unpaved routes, several deviations from the concept of a traditional touring bike can help. 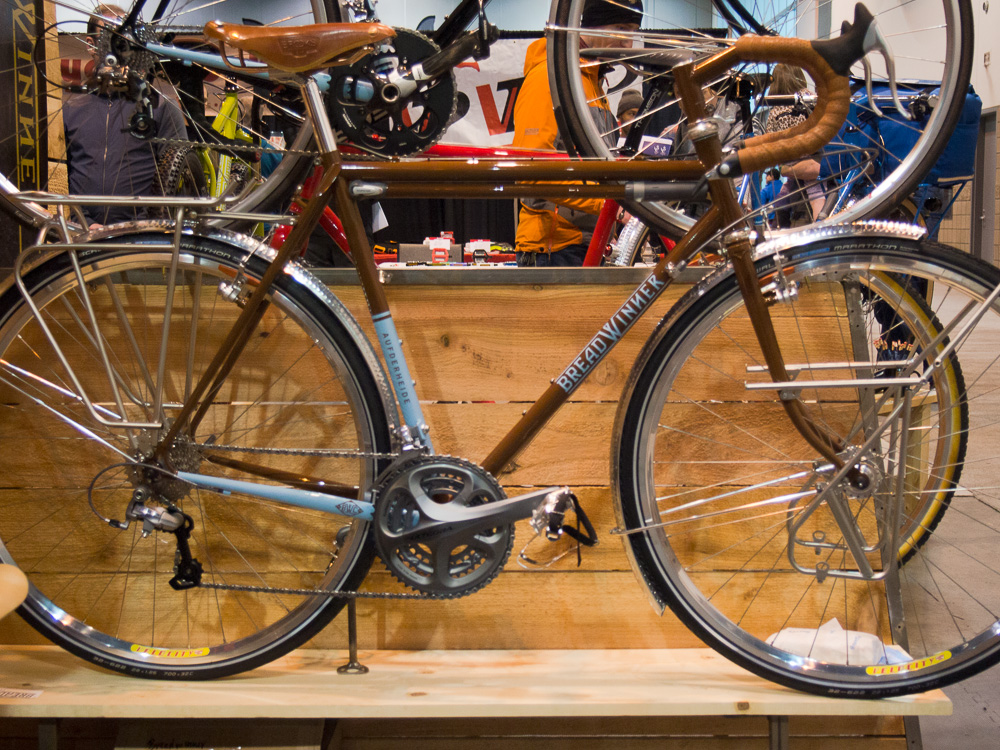 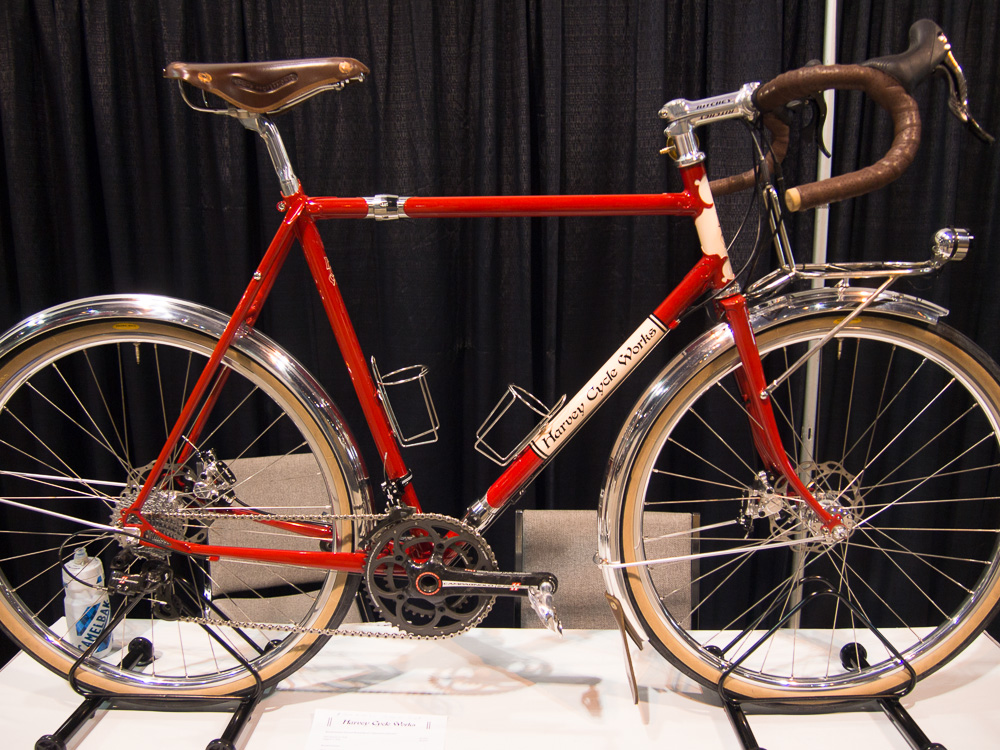 2. This light touring model from Harvey Cycle Works features larger volume 650b tires. The rim is smaller in diameter than the bike above, but the frame allows a larger tire for a cushioned ride on rough surfaces. This bike hides a lot of modern features, including cable-actuated hydraulic disc brakes mated to Campy 11-speed levers. 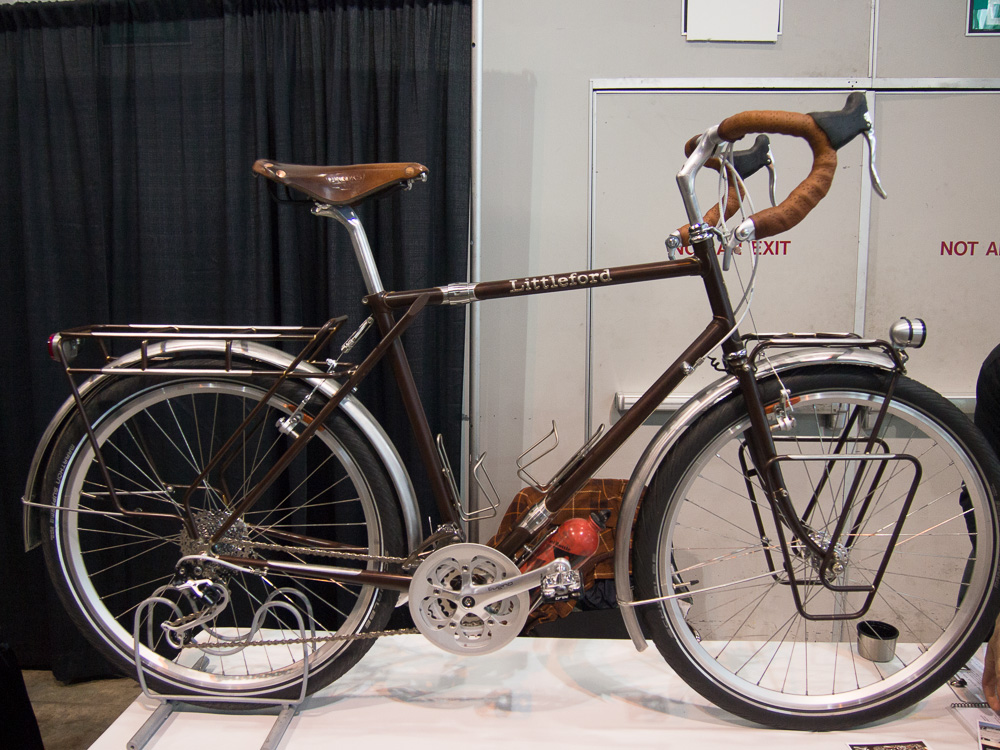 3. The Littleford Expedition tourer makes use of 26" wheels as the foundation for a rugged world-tourer. 26" wheels are the most common wheel/tire size around the globe. The smaller wheel is inherently stronger, and the larger tires cushion the ride and provide traction when off the beaten path. Rugged racks carry a full load of luggage. 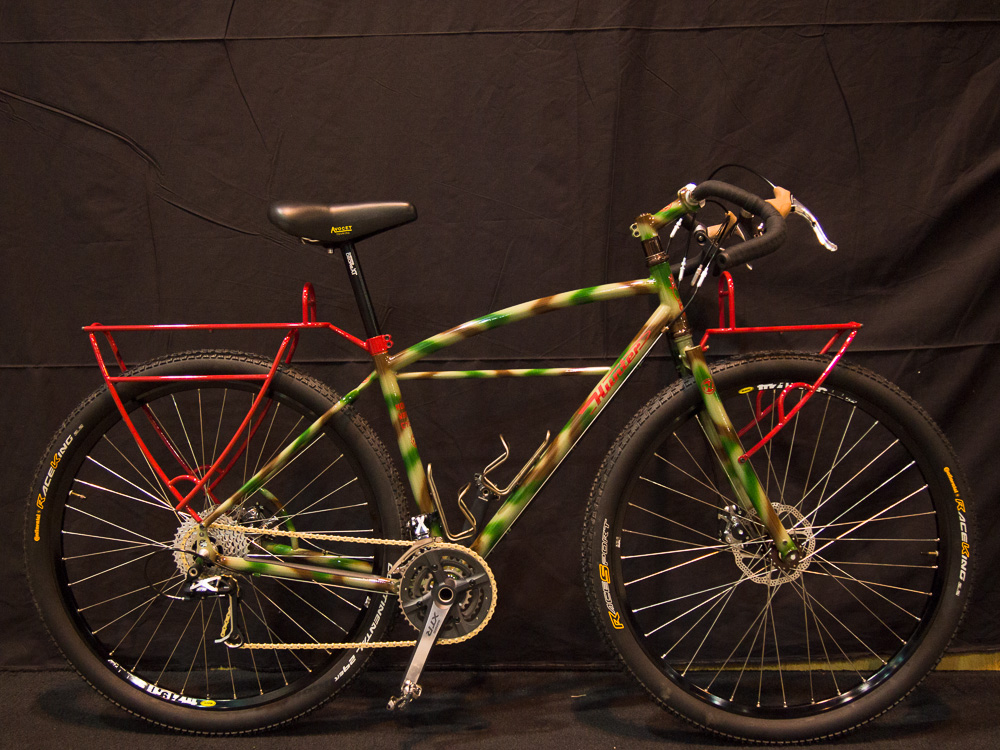 4. Another popular concept in off-pavement riding is the 29" wheel. While the rim dimension is actually the same as the 700c wheels on your road or touring bike, with a voluminous tire the outside dimension of the wheel is nearly 29" which improves the capacity of the bike to roll over obstacles and maintain momentum. This can be helpful on rough, washboarded roads like on the GDMBR. This bike built by Hunter Cycles pays homage to vintage mountain bikes from the 80's, with modern considerations, including disc brakes and big wheels. 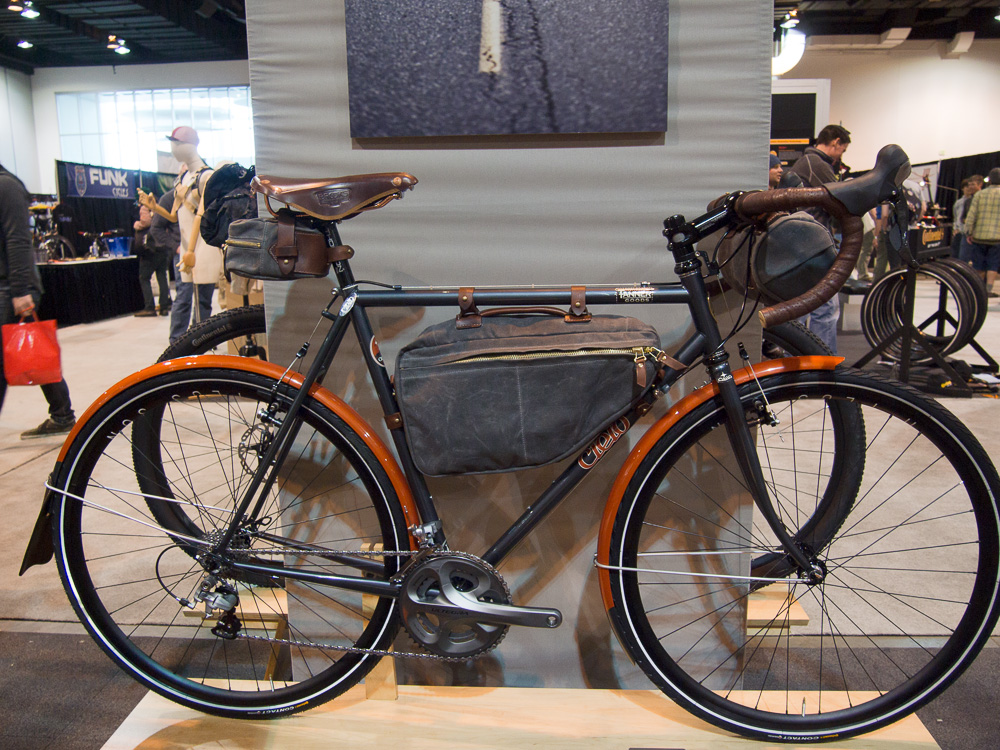 5. Breaking from the traditional concept of touring with racks and panniers, this Cielo commuter/tourer is wearing rugged canvas and leather bags inspired by ultralight bikepacking equipment. 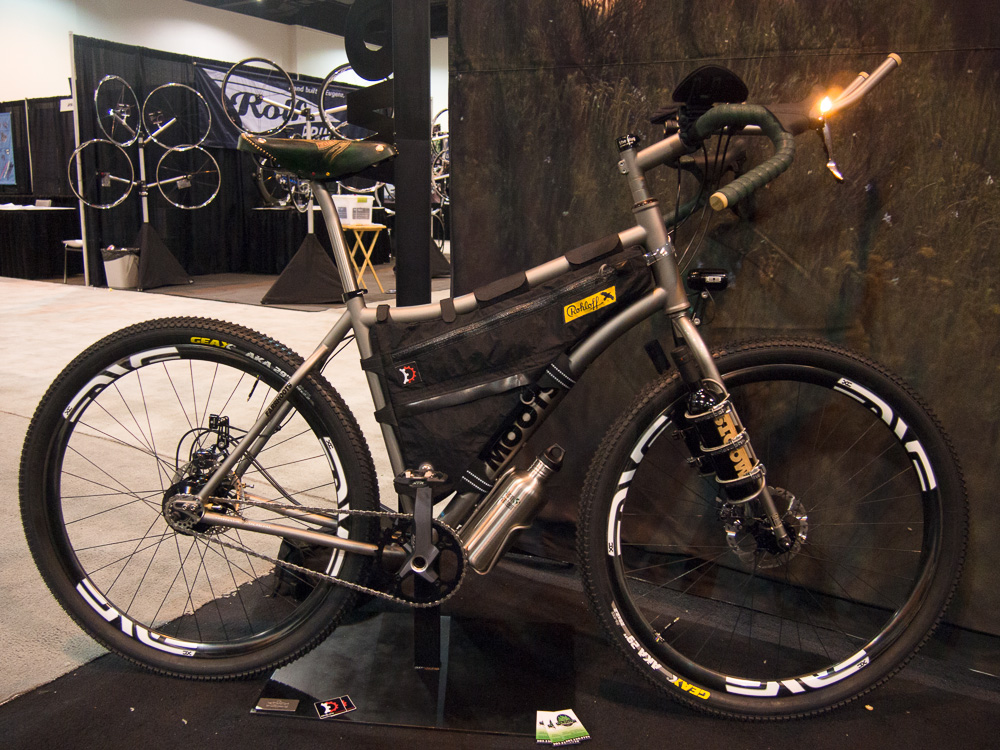 6. Moots Cycles displayed this titanium drop-bar 29er, designed to race the Tour Divide on the GDMBR and the CTR (Colorado Trail). While this design retains drop bars common on road touring bikes (and aero bars!), it is otherwise outfitted like a mountain bike with knobby tires. A framebag and other bikepacking equipment will round out the luggage system on this bike, which includes several mounting points on the fork for water bottle cages or the Salsa Anything Cage, which is a simple harness system for small bundles of gear. Pictured on the fork are two new Manything Cages from King Cage, constructed of tubular stainless steel to overcome some of the failure risk of the aluminum Salsa cages. 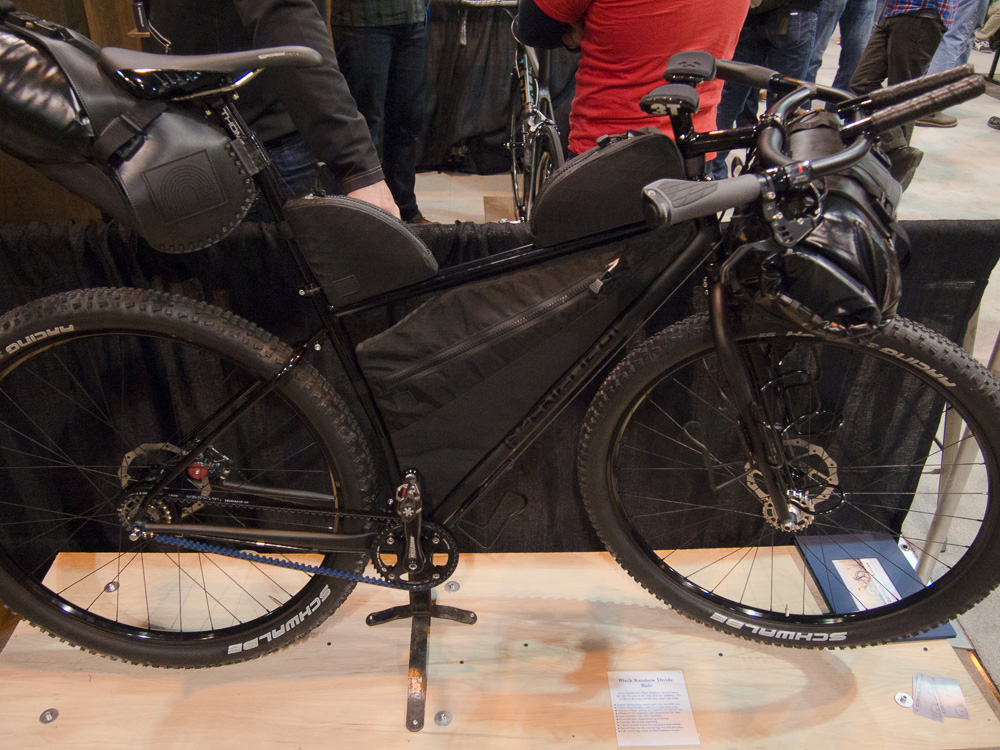 7. Pushing the concept even further, this custom creation from English Cycles loses the drop bars in favor of a multi-position upright bar. Aero bars will still be useful on long stretches of smooth dirt and pavement, as this bike is planning to race the Tour Divide as well. The full luggage capacity is shown, including two standard water bottle cages on each fork leg. The fork is also built to swallow a fat tire (26x4.0") in the off-season. 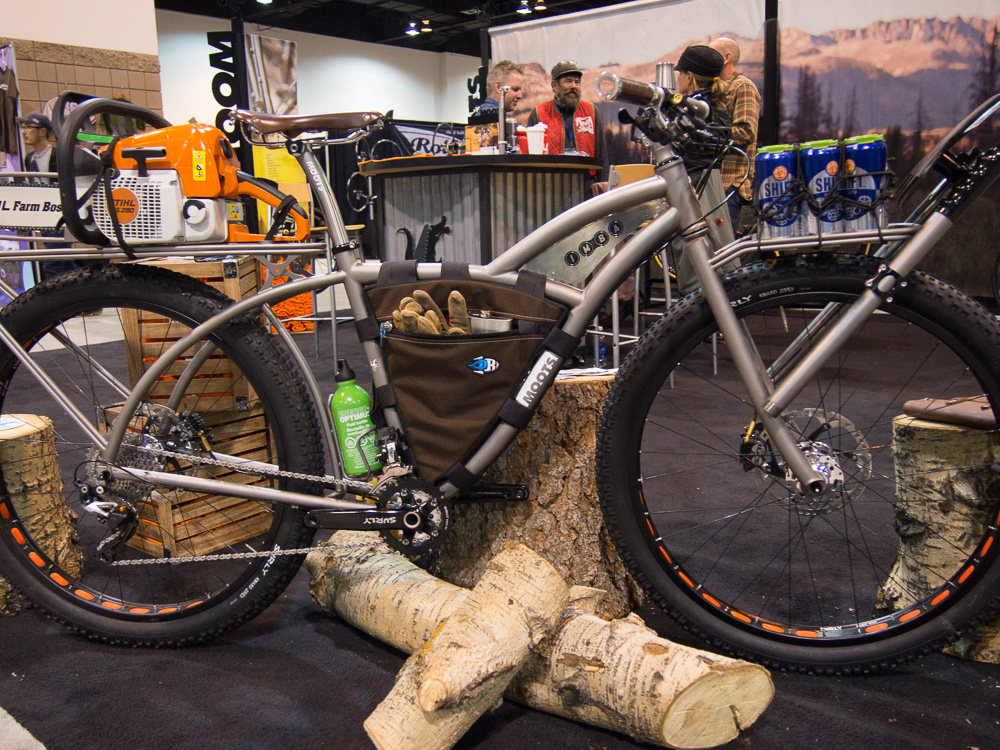 8. Not into ultralight racing concepts? This Moots bike is designed as a rugged trail-building machine. With integrated racks front and rear, it is loaded with a chainsaw and a multi-function shovel/axe, as well as enough beer for a small crew. Built around the 29x3.0" tire introduced on the Surly Krampus, this bike has the capacity to reach remote places. Imagine losing the chainsaw and strapping a tent and a sleeping bag to the back. 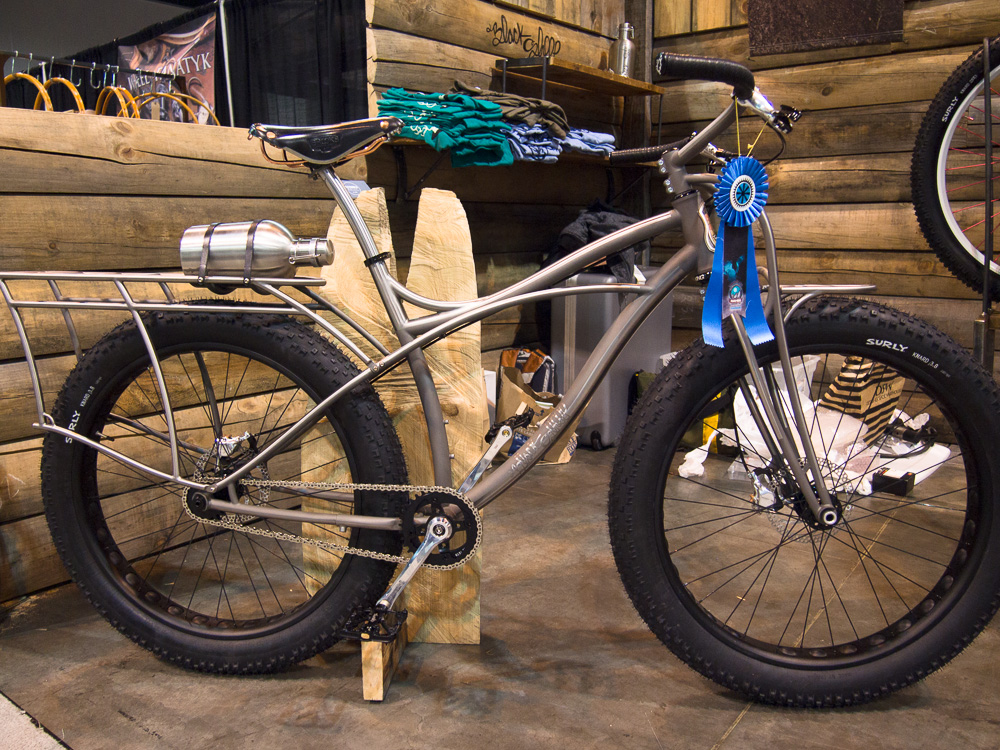 9. In a similar vein, this Black Sheep fatbike features integrated racks front and rear on a slightly elongated wheelbase. In the wake of longtail cargo bikes, medium length cargo bikes have become a popular solution for handling less than epic loads. 26X4.0" tires will go anywhere you can imagine “touring.” Start dreaming! 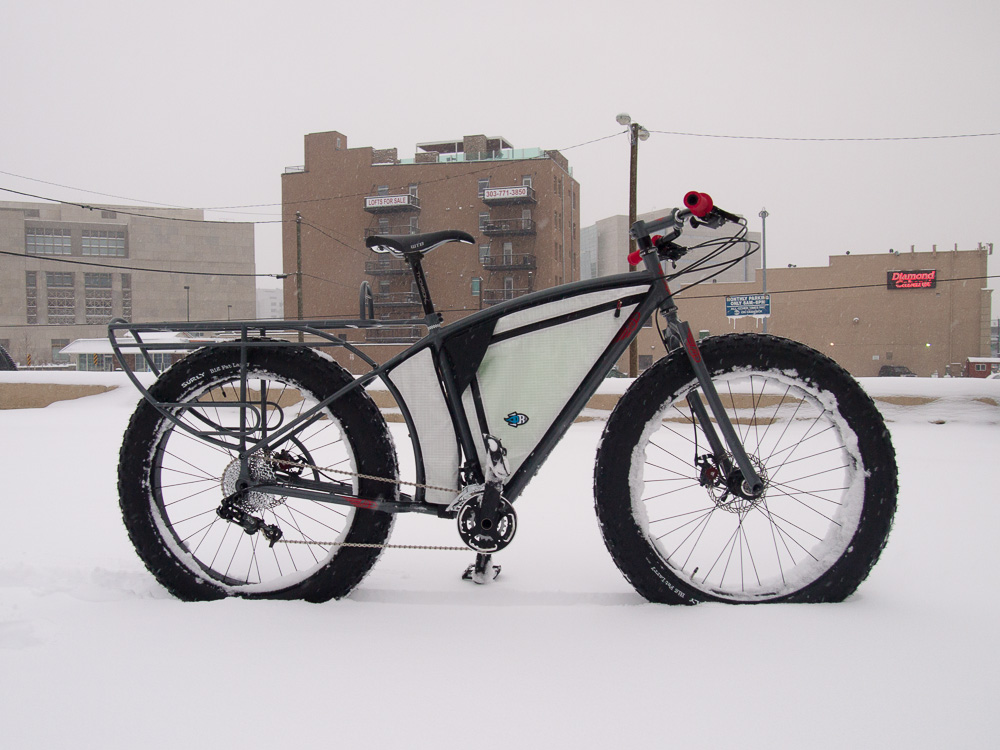 10. The king of all touring bikes at NAHBS this year is this longtail fatbike from Hunter Cycles, built for Scott Felter of Porcelain Rocket. Rick has been building for years, and Scott sews custom bags. The combination of their expertise creates an integrated touring bike for one of the most remote tracks in the world. This summer Scott plans to ride the Canning Stock Route in Australia, which is over 1000 miles of sandy desert doubletrack with no resupply points, and a limited number of water sources. Thus, this bike is designed to carry a month of food, several days of water, and several pounds of camping equipment. In addition to the framebag, Scott has made custom panniers for the rear rack, each double the size of a large Ortlieb bag, and a front handlebar roll to carry camping equipment. On 82mm rims and 4.8" tires, this bike is primed for expeditions on dirt, sand, or snow. 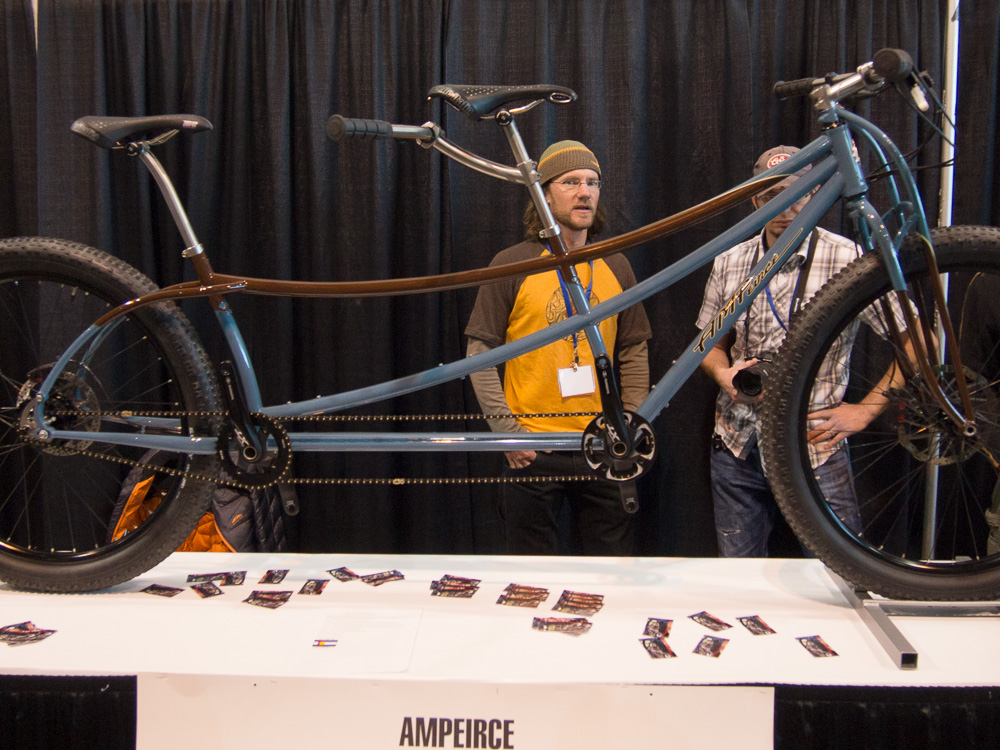 11. Touring with two? Several tandems were featured this year wearing the new 29x3.0" tires from Surly. This AMPeirce tandem is built to handle southern Colorado's rugged dirt roads and trails, and can even take a suspension fork in addition to the large-volume tires. How do you carry your stuff? Imagine each of those open frame sections filled with custom framebags. 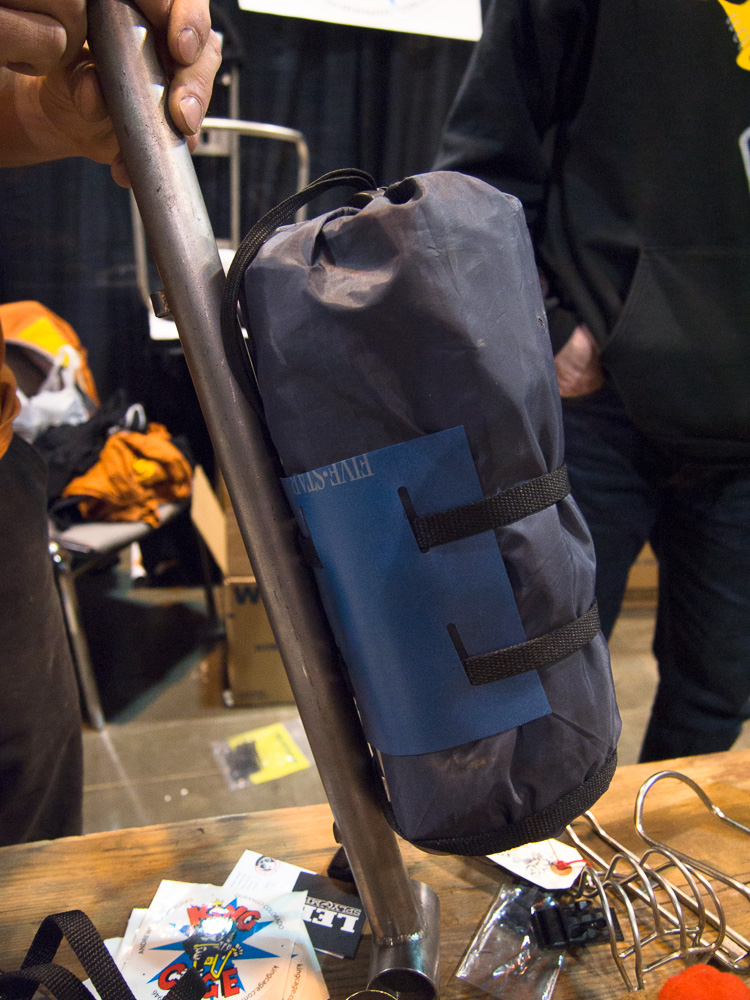 12. This is the new Manything Cage from King Cage, designed as a more rugged alternative to the aluminum Salsa Anything Cage. Made in Durango, CO. 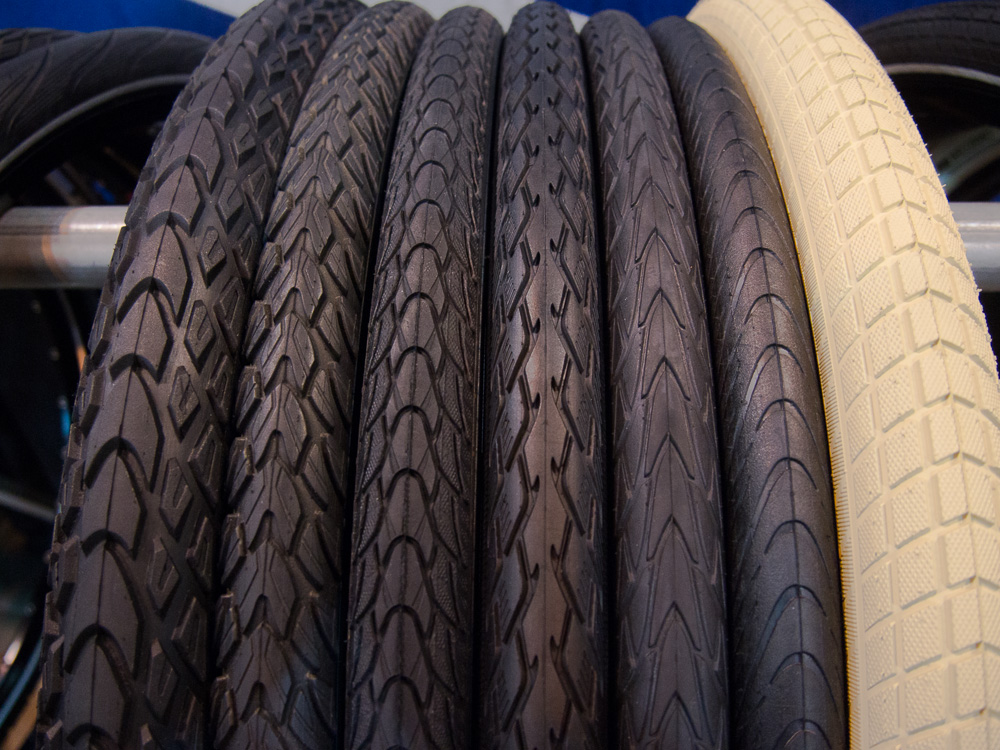 13. Schwalbe displayed multiple new options in large volume touring rubber, including the new Big Ben tire, which is a more rugged sibling of the Big Apple. The globe-trotting Mondial now comes in a 29x2.0" size for dirt touring.

NICHOLAS CARMAN left on a bike trip in 2008, and hasn't stopped riding. He shares stories, photographs and ideas at gypsybytrade.wordpress.com.

Does anyone know where you can get the frame bag that's on the #5 cielo bike?