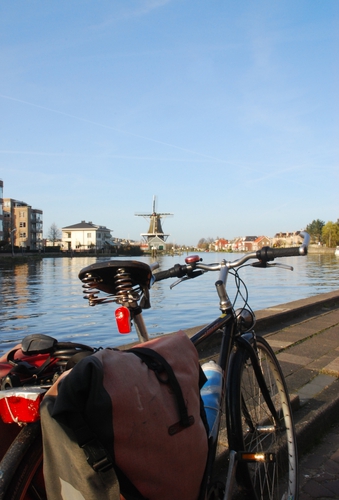 It's easy to be lured into spending a lot of money on a shiny new touring bicycle but you don't need a big bank balance to start enjoying bike touring. In fact, I've done my last 1,000km on a $100 bike from the local second-hand shop.

For that price, I got a steel-framed bike with plenty of attachment points for water bottles and racks, Shimano components, a reasonably sturdy back rack and fenders for rainy days. In Holland, where I live, $100 is the minimum price for a bike since high demand keeps prices inflated but in other parts of the world, used bikes can go for much less. (Richard and Amanda Ligato spent less than $50 on bikes for their Southeast Asia bike tour).

Price isn't the only advantage to buying a cheap touring bike. Unlike the custom-built tourer that I took around the world, this bike doesn't look fancy, so I don't worry about it being stolen or making me look like a good target for theft. I also don't fret about the bike getting scratched or left out in the rain. And because it's old, it won't depreciate much, so I can recoup my money by selling it on when I get tired of it. My cheap touring bicycle may not be the most beautiful bike in the world, but it is beautifully worry free.

Here are a few tips if you'd like to find a cheap touring bike:

Buy Second-Hand -- If all you want to spend is $100, you have to buy a used bike. Supermarkets and department stores also have bikes in this price range but the quality is terrible. Sometimes simple things like brakes can't even be properly adjusted. You're much better off checking second-hand shops, garage sales and eBay for used bikes.

Do A Basic Check -- Make sure the bike feels comfortable and that there are no big signs of trouble. The last thing you want is a bargain that turns out to be a money pit once you get it home. If you aren't too familiar with bikes, turn your hunt into a learning experience. If you can, enlist a friend who knows more about bikes to help with your hunt. Key things to watch out for include:

Be Prepared To Make Small Upgrades -- No bike is perfect and you will likely want to make a few small changes. I've spent about a further $100 adding new tires, bar ends and a leather saddle (a 25-year old Brooks that I found in a market for $10). All of these things can be transferred to any new bike I buy in the future.

FRIEDEL GRANT gave up life as a journalist for Reuters to ride a bicycle around the world with her husband. They pedaled 48,000km through 30 countries before settling down to ride bikes in The Netherlands. Friedel writes about bike touring on her website, Travelling Two and you can follow her on Twitter (@travellingtwo). She also contributes to Transitions Abroad and has written a chapter for the Adventure Cycle-Touring Handbook.

ALWAYS CHECK OUT YOUR LOCAL SCRAP/JUNK/SALVAGE YARD. MY LOCAL YARD SETS ASIDE ALL THE BIKES THEY RECEIVE AND I CHECK IN 2 TO 3 TIMES A MONTH. THE BIKES THAT I DON'T HAVE AN INTEREST IN, I TRANSPORT TO "FREE RIDE" WHICH IS A BIKE CO-OP IN PITTSBURGH, PA.

I agree, shopping for a bicycle at a big box store is a terrible idea. I tried it last year when searching for a bike for an adult daughter. After I got it home I discovered a spoke was missing from the front wheel. Since she liked the way the bike looked I took it to a bike shop to have the spoke replaced. After spending an additional $20 the bike mechanic showed me that the bearings in the rear wheel were too noisy. I took the bike back and told them I've seen better quality at yard sales.