Touring Aboard a Cyclocross Bike 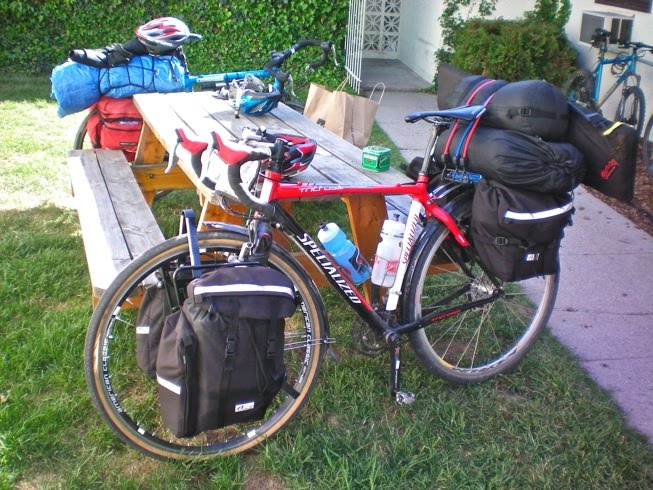 The other day I received a great question over the phone from a cyclist who said she could really take on just one bike. She wants it primarily for fast-paced road riding, but she'd also like it to be worthy of loaded touring. Having been in a similar situation in the past myself, I suggested the route I chose: a cyclocross bike.

Cyclocross bikes have been growing rapidly in popularity over the past few years, so their availability and selection are strong. Their geometry lies somewhere between that of a touring bike and a road bike. However, when trying to make a single bike work well for two very different disciplines (quick and light road riding and loaded touring), you're bound to run into a few issues that need some tweaking. Here are some things to keep in mind.

1. Heel Clearance: Cyclocross bikes have longer and wider chainstays than road bikes, which makes them great for running wider tires, as well as providing plenty of space for fenders. At the same time, the chainstays are shorter than those found on touring bikes, so heel clearance can be an issue with rear-mounted panniers -- depending on how far back you're able to position the panniers on your rear rack. This problem can often be solved by using smaller front panniers on the rear, but it is a compromise.

2. Gearing: Some cyclocross bikes come stock with a triple crankset, but the majority have compact double cranksets. Depending on your preferences, a compact double may not offer low enough gearing, in which case an upgrade to a triple would be in order. Also pay attention to the rear derailleur. Short-cage road derailleurs allow a maximum cog of around 27 teeth; swapping out for a long-cage derailleur to make room for a wider range cassette isn't a bad idea.

3. Bottom Bracket Height: Traditionally, cyclocross bikes have a high bottom bracket, which will raise your center of gravity a bit. This may or may not be of concern to you, but it's a good thing to keep in mind. Newer cyclocross bikes are coming with a lower bottom bracket height, more in line with road bikes, so this may be an issue that's going away.

4. Wheelset: Since cyclocross bikes are aimed at a specific sport and style of riding, they often come stocked with a sporty wheelset that may or may not be ideal for touring. If you're interested in fast-paced road riding in addition to touring, you can always use the stock wheelset for your road riding, and then purchase a second wheelset for touring.

5. Rack Eyelets: As the sport of cyclocross becomes more specialized, you're seeing a lot of racing bike features that often exclude fender and rack eyelets. At the entry level, however, you can still find bikes with rear rack eyelets. The Cannondale CAADX and Redline Conquest are a couple of bikes that will give you rear rack eyelets, while the Bianchi Volpe has both full front and rear rack eyelets.

These issues will involve some cost, but a cyclocross bike may still be a better, more economical option than purchasing two specialized bikes. If it all seems too complicated, there's nothing wrong with purchasing the speedy road bike you want, and hitching a trailer to it for touring.

Hi, I'm thinking about riding the southern tier (west to east) departing in Sept 2020 and do it unsupported on a cyclocross, more specifically a 2016 Focus Mares CX disc full carbon with Sram Rival 22, 11/30 cassette. Currently has Alexrims ADT-490 wheels with 700x35 WTB Cross Boss TCS Light Fast Rolling tubeless tyres. I have 2 x Thule Pack 'n Pedal 100090 tour racks with the plan to use some dry bags. I have space on the frame right now for QTY 3 water bottles but could go up to QTY 5 water bottles. Would this set up work or should I change the cassette and wheels? Any feedback would be appreciated. Cheers. Josh.

How much weight did you put on your Jamis Nova Race in total?

I have toured across the UK and Europe on a cyclocross bike, completed the Northern Tier in 2012 on one and am about to start the Southern Tier on it next week. No problems at all and when you do ride then unladen they don't ride like a tank. If you're only doing light touring and want to go one further, why not go for an Audax road bike. They are really fun to ride.

If you're willing to pack light enough, lack of eyelets isn't an issue. A few years back I did WE+TA on a road bike without eyelets. That somewhat limited me to ~17lbs of panniers on a seatpost-mounted rack (rated to 25 max), plus a couple pounds in random bits in a bladder backpack with up to 200oz. water. But honestly, across the entire trip I never missed anything because I didn't have the capacity to carry it. (Excepting maybe water capacity to camp in the longer desert stretches, but it wasn't a problem to plan to be in cities overnight.)

Touring again for the first time in 5 years this spring. Using a 1 year old cyclocross bike. I'm opting for a cargo trailer instead of panniers. I did a week long tour with my son years ago on a road bike and did not like the panniers at all. Comments?

I've been using a Motobecane cross bike for four seasons of touring with very good success. Great compromise of sturdiness for trails and speed for training rides. The two challenges are: the rear chainstays are short and made it difficult to get fenders - I ended up using bamboo strips and made custom fenders. The brakes on mine are disc brakes, so I had to find a rack with very wide spacing to fit over them.

All things equal, I really like my Cross bike for a every day rider that I also take on week-long tours.

I cycled the 470 mile blue ridge parkway on my JAMIS Nova Race cyclocross bike. I carried all the gear I needed for fully self supported camping.

With a little bicycle knowledge, knowing how to work on one, you can build a touring bike up from most any road or mountain bike. I'm currently using a cheap department store bike frame and fork, from the early 1970's, a rusted Pan World bicycle found in a dumpster, and repainted and refit all items on it for $215, mostly from other used bike parts collected through the years. I was pleasantly surprised at the stiffness of this old German made frame. It isn't supposed to work as well as it does as it sold new for about $70, but it is an excellent touring bike. I've been on a number of tours with it, 5 so far, and they've been very successful, fun, trouble free rides. With a little effort, and desire, you really can put together something that not only works but works very well for a lot less money. You can see the bike on flickr.com, under my name, Johnny Sachu.

I think the bike needed reflects the environment. I toured all over Europe on an older Jamis Nova and it was perfect. I had it outfitted with rear panniers and a huge handlebar bag. I also used the Tubus Logo.

One suggestion for the heel clearance issue (I'm riding a Salsa Fargo) is to look into the rear racks that are built to hold the panniers further back, like the Tubus Logo. Also, Tubus makes a handy little adaptor plate that lets you mount the rack about 1-2" behind the eyelets, giving your heels some extra room. The author's suggestion of using smaller paniers works too of course, but if you really need some extra cargo room, look at those items as an option.

I've been riding and touring on the Surly Travelers Check, basically a CrossCheck with S&S Couplers, for the past two years. It's a great bike for light touring and just kicking around town and day rides with friends. For me, a cyclocross bikes make great all-around bikes. I think people are warming to the idea that you don't need a dedicated touring bike if you are mostly doing short, light tours.

Great post, I shared the link on my site, Jack Moore