Several of the riders on Adventure Cycling's Southern Tier fall 2013 tour have definitely caught the attention of the tours department. Was it the level and degree of their spontaneity, serendipity and fate, or just the raw courage and determination of some of the riders? You decide for yourself. 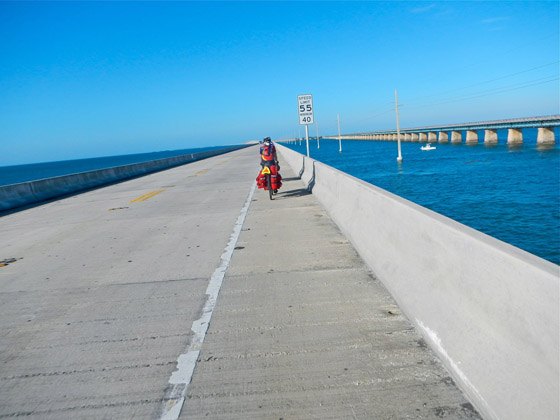 Let me introduce you to Dan Leonard, Bill White, Rob Waterhouse, and their leader, Sally Fenton. I talked with them by phone from the road and here’s a glimpse of their story and the formation of what I’m calling the “Tour de Fête.”

Dan Leonard caught our attention immediately when he signed up for the Southern Tier the day before it started – Sept 13. This alone made us want to know more about this particular rider, but there’s much more. Dan lives in San Diego but he hails from British Columbia. He had just finished a trip bicycling from Vancouver, BC down the Pacific Coast to San Diego, when he ran into a kindred spirit, Bill White, at the Point Loma Hostel, the starting point for Adventure Cyclign's Southern Tier tour. Bill, who hails from Florida, told me it was a chance meeting. Bill had signed up for the Southern Tier in March 2013, and had long planned his epic trip. He called Adventure Cycling to tell us that Dan was interested in joining the tour even though it was on such short notice, and was amazed because Dan didn’t have a touring bike to ride or the gear for such a tour. There’s more. Dan is extraordinary — he has lost one of his arms, yet rides with tremendous strength and vigor. And he doesn’t just ride, he rides fast and beats people up hills. Bill told me Dan is in incredible shape and “is stronger than I am!” They connected immediately. And on top of everything, they learned that they were both celebrating their 60th birthdays — Bill had celebrated his in February — but Dan’s, should he join the trip, would be celebrated along the ride! Bill encouraged Dan to talk with Sally Fenton, our tour leader who was already at the hostel as well. Together with Sally’s wisdom and guidance, Bill’s encouragement, and some tremendous help from Roger, the owner of the Bernie’s Bike Shop in Point Loma, everything came together just in time — the tour started in the morning! 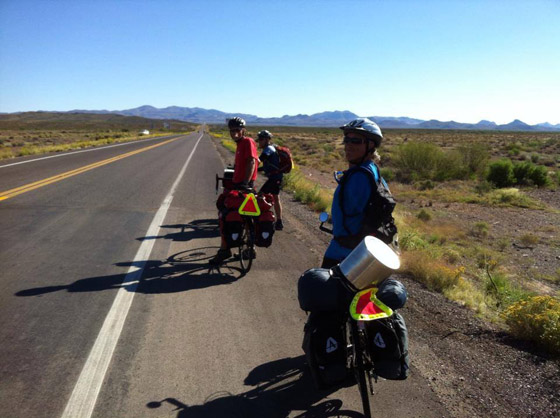 Enter stage left from the UK — Rob Waterhouse from Harrogate, England. You could say he’s a spontaneous cyclist just like Dan. When I spoke with Rob he told me that he had toured with Sally Fenton on the TransAm, in 2011, had stayed in touch with Sally via email, and was interested and encouraged to tour with Adventure Cycling again soon. He just didn’t know how soon! 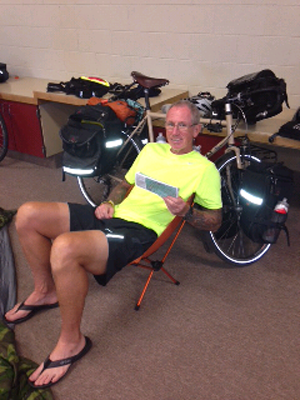 Rob says it well on his blog, Rob's Cycle Across America: “After a couple of days of deliberation mainly thinking about why I should not do this, I decided to disregard all the negatives and just do it.” And just like Dan and Bill, he was celebrating 60 years of living on this glorious planet and chose to celebrate it on two wheels, rolling across America along the Southern Tier. It’s a testament to the benefits of connecting with strangers. Learning more about Bill, Dan, and Rob's stories from the tours office in Missoula, I discovered they had everything to celebrate and little to hold them back.

For more information about this group or the Southern Tier “Tour de Fête” visit Cycle Touring Heavy Haulers or Rob's Cycle Across America.

Fantastic story! It does not surprise me that Bill White jumped in and helped Dan get into the group. Bill was the "local" for this past January's ACA Leadership Training Course and his generosity and hospitality was noted by many of the attendees. Great to see him and the Southern Tier group out there and doing what we love.