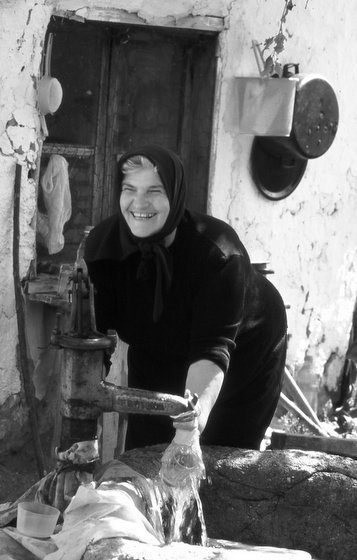 One of the top reasons for traveling by bike that isn't mentioned often enough is the ability to eat ... a lot. To spend several months traveling, eat like there is no tomorrow, and still lose weight! To not only breathe in culture, but consume it gastronomically.

Both Kat and I are fans of the Bravo series Top Chef. This reality series pits up- and-coming chefs against each other until only one is left standing.

I would love to have entered the woman above in that competition. She would have cooked circles around those culinary kids. Then she would have done all the dishes afterward.

It was a hot, way too hot, summer afternoon in Macedonia. We were pedaling down a dirt track when a couple of women waved us over. Their simple stone dwelling was country modest. A smokey fire burned in the wood stove, iron skillets hung from hooks, and baskets of vegetables were stacked up in the corners. Their older brother worked the bellows to keep the coals hot.

This woman proceeded to serve us a meal like none other we'd had on the planet earth. The dish was simple -- Tav?e Grav?e -- "beans in a skillet." A Macedonian classic.

The beans, the paprika, the mint, the onion ... all fresh. Not Whole Foods fresh, but walk out and pick it or dig it up fresh.

Of all the restaurants and cafes and deli's in all the countries we've traveled, "beans in a skillet" is the meal we most often dream about.

Of course, it didn't hurt that it was served with fresh bread smothered in ajvar -- a heavenly inspired spread made from roasted red peppers, eggplant, onions, garlic, and olive oil.

She kept serving us until we begged her to stop. After she did the dishes (refusing help), she sent us back out on the road with a precious gift -- a large jar of ajvar. A week later we finished it off, licking it clean as if it were our last meal.

Culinary greats will come and go, but the woman above will always be our top chef.