I’ve been an Adventure Cycling member for 10 years and love daydreaming about exotic travel each month when the magazine arrives. But my home state of Massachusetts ain’t no chopped liver — far from it! As founder of the original Massbike Festival and Pie Race (2003-2007) and logistics and publicity coordinator (and ice cream tester!) for the Mass BikePike Tour, I’ve had the opportunity to enjoy many regions of Massachusetts. From our glorious and fleeting springtime, to summer days at our famous beaches or Berkshire mountains, to the unforgettable autumn foliage and country fairs, Massachusetts packs a lot of wonderful — AND the world’s best ice cream! — in a tiny state. And a bicycle is the best way to enjoy it, of course! 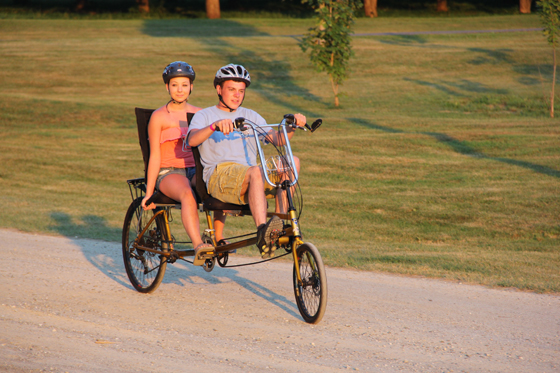 Because I spent my first 5 years in Massachusetts without access to a car, all of these rides are easily accessed by public transportation.

The seventh-annual Mass BikePike Tour is known as the “Friendliest Ride in the East.” Affordable and convenient, this tour starts and ends in Fitchburg and you’ll enjoy four days of quiet scenery, delicious food, and great company. Proceeds from the tour benefit Massbike. A rider recently summed it up on our Facebook page: “Truly, a bike tour like Mass Bike Pike has something for everyone: speedsters, tootlers, sight-seers, oldsters, youngsters and everything in between.” Off the bike, riders will have the chance to enjoy the 75th annual Cheshire Fair, and the Massachusetts State Chili Cook-off! Registration for the Mass BikePike Tour closes on July 14.

2. Ride the Cape for Cheap

Lodging on Cape Cod can be pricey, but the Cape is dotted with homey hostels that welcome cheerful travelers of all ages. Take the brand-new train service to Hyannis and you can stay at the hostel on the harborside for cheap; ride up to the Eastham hostel for a rustic night at the summer camp-like property; then continue to Truro to enjoy a historic hostel with its own beach. Finish your adventure with a day in P-Town before ferrying back to Boston. Riding from Boston to Provincetown in one day is a rite of passage for many Boston cyclists, but there’s no reason not to stretch out the fun times and truly explore!

The MBTA commuter rail goes up the North Shore so pick a stop and hop off for one of the most scenic rides around. For a longer loop, I recommend Manchester-by-the-Sea. The short loop around Cape Ann proper is about 27 miles. Consider a stay in picturesque Rockport (The Inn on Cove Hill is particularly bike-friendly) and spend your time exploring the various beaches and views on Cape Ann. No parking hassles — just ride up to the beach! Cape Ann is popular with locals but is still a bit of a best-kept secret despite the amazing beaches and incredible scenery. If you come in early October you’ll be joined by the biggest cyclocross race in New England — bring a cowbell and join in the cheering!

Stay at the Royal Sonesta in Cambridge, where you can use one of their many bikes (including kids’ bikes and a tandem!) for free. Roll down the Charles River paths while enjoying the fun of an urban escape. Boston has come a long way since its infamy as one of the worst cities for cyclists 15 years ago. Venture over to one of our many farmer's markets, run your own Boston ice cream taste test or join others at a Circle the City festival or the Hub on Wheels ride.

5. October in the Pioneer Valley

Attend the famous Great River Ride in the Pioneer Valley or stay at the bike-friendly Sugar Maple Trailside Inn, where you can borrow their Raleigh 3-speed cruisers and set off on the adjacent rail trail. Explore bustling college towns, climb up steep Sugarloaf Mountain for great views, or join a local cycling club for their weekend rides.

KARIN TURER founded Tugboat 23 Consulting (named after her bike, of course!) and helps nonprofits — including many bicycle-related ones — with their fundraising and events. She moved to Massachusetts from the NYC area 15 years ago and loves it so much that she is raising her son as a Red Sox fan.