This Bike-Traveling Professor Makes the World His Home 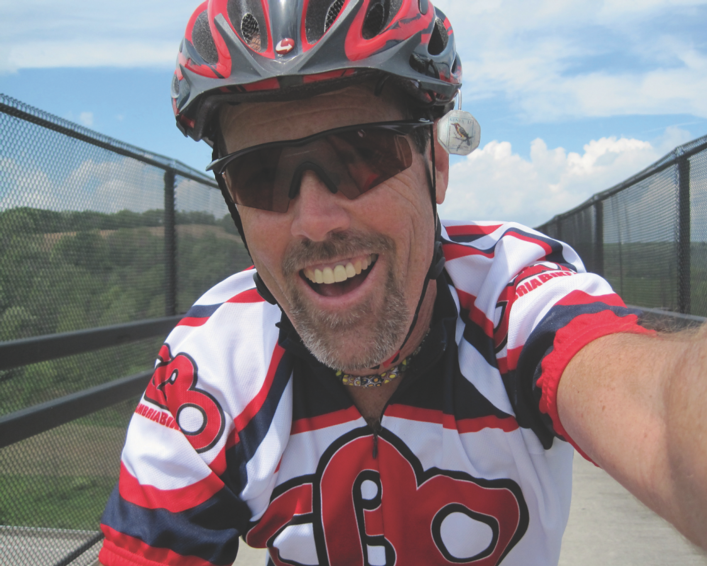 “I wanted to help [my students] fall in love with bike touring: to smell it, hear it, see it — to experience a different way of living.” –Dr. Randy Cronk, Legacy Society Member

Meet Randy Cronk: psychology professor and bike traveler. He’s traveled the world and wants others to discover the joy of bike travel. That’s why he became a Legacy Society Member and included Adventure Cycling in his will.

I believe that bicycling has enriched my life tremendously, and after I’m no longer able to give of my time and talents to support bicycle touring, I wish to support organizations like Adventure Cycling that will enable others to discover and enjoy the rewards of bicycle touring.

There are still places on the globe Dr. Randy Cronk has not cycled. For instance, he has never turned a pedal in Antarctica or North Korea. “I’m not really a bucket list kind of guy,” said the Ohio psychology professor, “so I’ll just have to see where the rest of my cycling life takes me.” So far, Cronk has managed to shoehorn over 60 tours in 86 countries into holidays, summer breaks, and sabbaticals from his day job at Mount Vernon Nazarene University.

When the university recently stopped offering a January term, it threw a wrench in Cronk’s 30-year “BiPsychling” tradition. Every other year since 1986, he led students on a month-long, 1,100-mile tour from San Francisco to Phoenix. “It was a cross-cultural experience for students,” said Cronk. “Some students had never been out of Ohio.” Along the way, the students learned about social psychology, positive psychology, and, maybe most importantly, self-efficacy. The trip gained popularity over the years, ballooning to 42 students in 2014 with every person riding the entire 1,100 miles. “I wanted to help them fall in love with bike touring: to smell it, hear it, see it. To experience a different way of living.”

It was during a group tour where Cronk, as a first-year graduate student at Indiana University, caught the bike travel bug. “I joined a friend who was leading a small group of high school students on a four-day, 220-mile supported tour,” he said. “I was hooked on bicycle touring from then on.” Over the next few years, he toured around the Midwest and led the first of his California-Arizona rides with students. In the summer of 1987, Cronk rode his loaded bike out of Seattle, Washington, and headed east. “My first trans-America tour was probably one of the most significant tours of my life. To bicycle across America, my country, made this land ‘home’ in a way that only a select few of its citizens can imagine or have had the privilege to know. Indeed, although I may have an Ohio postal address, through cycling, the world has become my home.

“I believe that bicycling has enriched my life tremendously, and after I’m no longer able to give of my time and talents to support bicycle touring, I wish to support organizations like Adventure Cycling that will enable others to discover and enjoy the rewards of bicycle touring,” said Cronk. But as long as he can still ride, he’s intent on sharing cycling with anyone game to keep up. Five years after his first cross-country ride, Cronk and his wife, Becky, zigzagged their way up the Continental Divide from Mexico to Alaska on a tandem. His 16-year-old daughter, Natalie, joined him the next year where they averaged 116 miles a day cycling from New Orleans to Canada. The next year, the family rode cross country in a blistering eight weeks. Cronk and his nephew, Jacob, have twice ridden border-to-border.

For all his world travel, Cronk doesn’t neglect his own backyard. He has played integral roles in both Knox County’s Kokosing Gap Trail and the Knox County Bicycle Club. Many local riders can thank Cronk for sparking their interest through a beginner ride, safety clinic, or one of over 30 presentations he has given about the power of bike travel.

One would be hard-pressed to find a better bike travel ambassador. To listen to Cronk talk about cycling is to be captivated by stories: the time he got to experience socialized medicine firsthand in 1991 after crashing on an oil-slicked road in Russia, interrupting possible guerilla fighters on a Guatemalan backroad in 1993, or battling brutal headwinds while being chased by a dog for a solid 10 miles in Montana. There is a consistent thread through all of Cronk’s adventures — the kindness of strangers. “For every mean-spirted act, I have experienced a thousand acts of kindness,” Cronk said. “In dozens of countries on every continent, I have been given shelter and food. More importantly, though, is the dignity that has been bestowed upon me as a traveler. I hope that I have always returned the favor and affirmed the dignity of the many I have had chance encounters with because I had the courage to hang panniers on a bike and make the world my home.”

Would you like to be a bike travel hero and ensure future cyclists will be inspired and empowered for years to come? Consider becoming a Legacy Society Member. Legacy Society Members’ donations go into an endowment fund to be used to ensure the long-term longevity of the organization.

If you would like more information about how to use your will to accomplish your charitable objectives, please contact the Development Office, at development@adventurecycling.org or call Annette at (406) 532-2775.