I have been riding on Terry saddles since they first came out in 1997. Terry was one of the first manufacturers using a "cut out." This empty space on the saddle is meant to relieve pressure on your privates and I’ve been a believer since the beginning. My first Liberator saddle is now installed on my original mountain bike that I use for commuting. When the Tri-Butterfly was released in 2001, I bought one and now it’s the only saddle I use. The significant other has become a convert too. He’s using the Liberator X Gel on his commuter bike and the Fly Ti on his road bikes. These saddles are lightweight, sleek, and work for us, as you can see in the photo from our garage! 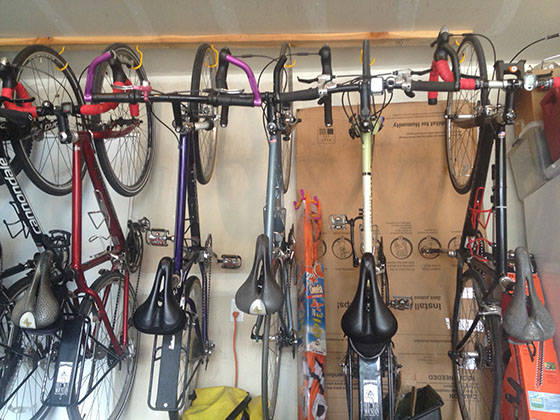 See the Terry saddles we carry in Cyclosource.

Sharon has ridden Terry for years. They tend to break down after a few years. I have always been a Brooks fan. Now we ride saddles from Rivet Cycle Works out of SAC. All leather, with cutouts. They are long lasting and more comfortable than both the Terry and Brooks. Check the Rivet out.